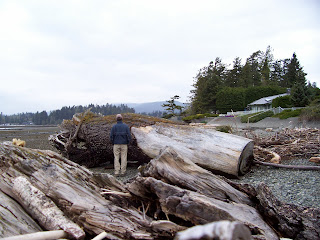 Another semi-permanent feature of Billing Spit is this large chunk of tree left over after logging sometime in the distant past. More than likely it was logged from somewhere in the Sooke river watershed, and eventually tumbled down into a winter raging river only to flow out into the harbour and land here. This giant is toward the end of Billings Spit just on the west facing beach.

As far as I know this log does not move with storms or tides. It has been here for at least as long as I have been here, but surely its tenancy is much longer than just 5 years. No doubt it will continue to live here for many years in the future.

Check out the DBH (diameter at breast height) of this tree. I am just shy of six feet. The log tapers quite quickly, though, but I still figure this douglas fir was between 3 and 400 years old when cut. Often old growth trees that are cut or fall in storms, or die of old age continue to lie around for many decades, perhaps a century, or more. They keep giving after getting horizontal, providing habitat and nutrients for hundreds of different species.
No comments: 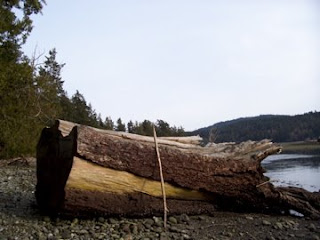 The Billings Spit area of Sooke is a good place to see big old trees, as well as large drift logs on the beach. The log above is up the beach from the park access at the end of Kaltasin Road.

Since this west facing beach is on the Sooke River estuary it collects debris from both the river and Sooke Harbour. Many a winter storm I have watched large whole trees washing down from up river, not to mention picnic tables, floats, and other debris.

Most of the material deposited on the beach will move on with the high tides. If the logs or trees are large enough they may endure for years. You can tell the severity of the storm by what it moves or carries away on this beach.

The log featured above is one of two on this west facing beach that have survived multiple years of river flooding, high tides, and strong winds. I finally took the time to count the rings on this log. I estimate that this Douglas Fir was about 330 years old when cut. The stick up against the tree is 5 ft long.

I wonder if it came from up the Sooke River, or if the tides brought this log in from elsewhere in the Harbour or Basin. It is possible that it came in from the Straight of Juan de Fuca. Stranger things have been brought in on the tides, such as a large, dead elephant seal. I wonder where the rest of the tree ended up. Perhaps it was used to build the building I live in.

Thank you, tree.
No comments: 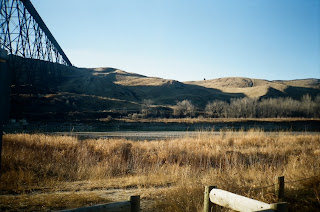 I am not a tree expert. I am a tree lover. This could be a result of being born on the prairies. I grew up in a knee-high ecosystem of endless shortgrass. In a landscape such as this every tree is precious.

The only natural trees on the S. Albertan prairies are near water sources. Cotton wood trees (Populus trichocarpa) can get quite large (height of 30-50 m and a trunk diameter of over 2 m), and rare ones grow to be up to 400 years old. In the spring their sticky buds emit a fragrance that a winter-weary nose can detect from 100 m away.

Most of the prairie, though, is grass. Further east, beyond the Great Plains was the tall grass ecosystem, but even that topped out at just over a meter.

Stay tuned for more trees and forests to blow you away.
No comments: 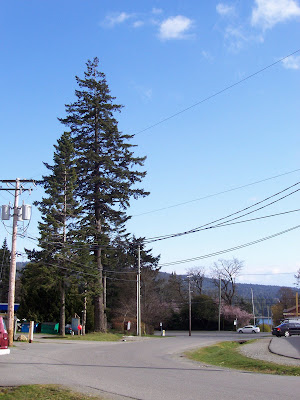 A bike ride from home into Sooke along highway 14 is not a wilderness experience like biking through the Sooke Hills, but big trees are to be found here, too.

On a recent ride to the library I photographed one of my favorite urban trees. It grows along Anna Maria Road in front of Eagle Eye Outfitters. It is a Douglas fir (Pseudotsuga menziesii), and not in the "huge" category, but for an urban tree it is sizable. Click on the photo to enlarge. The small car parked to the left of the tree provides scale.

A couple more large Douglas fir grow a block away in front of the Evergreen shopping mall, and next to the Loggers Pole. The pole commemorates generations of locals that wrestled similar giants down so that San Fransico could have piers, ships could have masts, and we could have houses and thousands of other products.

"87% of the original productive old-growth forests on southern Vancouver Island, south of Barkley Sound/Alberni Canal, have been logged. ie.13% remains"

The 13% that remains is breathing a little easier lately due to economic stagnation, trade disputes, and mismanagement.

Will this be a short respite from inevitable doom ala Easter Island? Or will we take this opportunity to end the destruction of trees up to 2500 years old that still exist in forests that have existed since the last ice age?

And don't forget the urban trees. Nothing improves our living spaces like trees.


"For in the true nature of things, if we rightly consider, every green tree is far more glorious than if it were made of gold and silver."

Where Are The Big Trees?

Living on the west coast of Vancouver Island we are frequently asked about where to find the big trees this sodden land is famous for.

The short answer is, "Everywhere!" We may not have much on the south island for old growth forests (older than 250 years), but what most people would consider to be giant trees still exist all over. Many are older than 250 years.

The header photo is a nice example of one such behemoth. This Western Red Cedar is a short cycle away from home just off the Galloping Goose trail, at the side of the Sooke River.

This blog will highlight similar notable large woody entities. Posts will include photos, directions, and tree and forest related information. Visitors are encouraged to share information about big trees in their area.


"Every craggy and gnarled tree has its own strange and graceful legend attached to it."
Douglas Hyde
No comments: