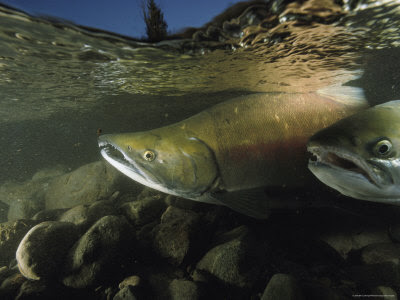 Few major urban centres anywhere enjoy the easy access Victoria, BC has to an old growth forest area, let alone a protected one. The city is only 16 km away from Goldstream Park, a place where you will find an active spawning river as well as ancient trees. Many of the trees in the park are older than 10 human lifespans. This area represents a tiny, tiny fraction of what was once one of the mightiest forests on the planet, and even this protected bit is under attack.

Human "progress" threatens forested areas everywhere, including land within the Goldstream watershed. Crown land adjacent to Goldstream was sold by the BC Liberal government to Western Forest Products in 2001. WFP then sold the land for Bear Mountain resort, and it is being rapidly developed with high rise condo towers (ranging from 27 to 45 stories), five thousand square foot houses, and a golf course. An interchange being built solely to service this "mountain top removal" neighbourhood required an endangered Garry Oak grove to be destroyed. The Garry Oak ecosystem is one of the most threatened on the south island. Now "Bare Mountain II" is rearing its ugly head. The fish, trees, animals and insects of Goldstream Park are threatened by this encroaching cancerous mass.

You might think that salmon have nothing to do with trees, but for thousands of years the mighty salmon has fed the giants of the Pacific coastal forest. Spawned out salmon carcasses feed trees beside waterways. Floods and feeding bears transport carcasses deeper into the forest. Blue ocean is converted into green forest in an endlessly repeating cycle. Our poor choices threaten this system.

Scientists estimate that up to 75% of the nitrogen in trees beside salmon bearing waterways is from the ocean, delivered by the salmon returning to their home forest. This is a significant contribution to trees such as the ones you will find at Goldstream. The trees help the salmon as well in a mutually beneficial relationship. The big trees purify water, moderate drought and flood, and create an environment in which streams can build deep pools and clean gravels where salmon can successfully spawn and rear.

The state of the salmon on the coast is pretty grim, much like the state of the remaining old growth forests. The ultimately sustainable, healthy food of the ocean has been mismanaged and is now in danger of immanent collapse. Open pen salmon farming with Atlantic salmon is not the answer either, and it seems to be taking an active role in the loss of native species. Urban development and the continued liquidation of easily accessed valley-bottom old growth forests add to the salmon's demise.

A short 20 minute drive will take you from downtown Victoria office towers to the towering trees and quiet of Goldstream Park. In the valley bottom of the day-use area grow enormous 600 year old Western red-cedars. Huge Black cottonwoods stake out moist territory closer to the estuary. The estuary supports up to 60 000 returning chum salmon in a season. This concentration of available protein attracts huge numbers of eagles, some years numbering in the hundreds. Eagles congregate in the park area from December to February.

Among the biggest trees in Goldstream are Grand fir, Black cottonwood, Douglas fir (one of which has a 2.07m diameter trunk at breast height), and Western red-cedar (one with a 5.63m diameter trunk at ground level). The trails around the campground areas hold even larger Douglas fir specimens. The Upper Goldstream Trail takes a hiker through some of the largest and oldest trees in the park.

Salmon and forest depend on each other. And we depend on them. Can they depend on us?
No comments: Links to this post