Trembling aspen are the most widely distributed trees in North America. They live up to their name. Even the slightest breeze makes them do their thing. They tremble.

This aspen tree has my favourite scientific designation that reflects this behaviour - Populus tremuloides.

I think the leaves are susceptible to moving and shaking because the "petiole is distally flattened at right angle to plane of blade".

That makes sense to me.

Trembling aspen grow to 35 meters, but height is not their most spectacular feature. What makes these trees special is that they can form large groves through root suckers, making them clones and therefore a single, huge organism.

There is an aspen grove in Utah that has a root system estimated to be 80,000 years old, and some say that is a conservative number. While none of the trees in the grove is overly tall, the entire clone is 106 acres in size.

The Utah grove is known as Pando, or The Trembling Giant.

The grove I photographed in central British Columbia along the Crowsnest Highway is considerably smaller, but just as amazing and beautiful.
2 comments: Links to this post

Ponderosa Pine Of Central BC 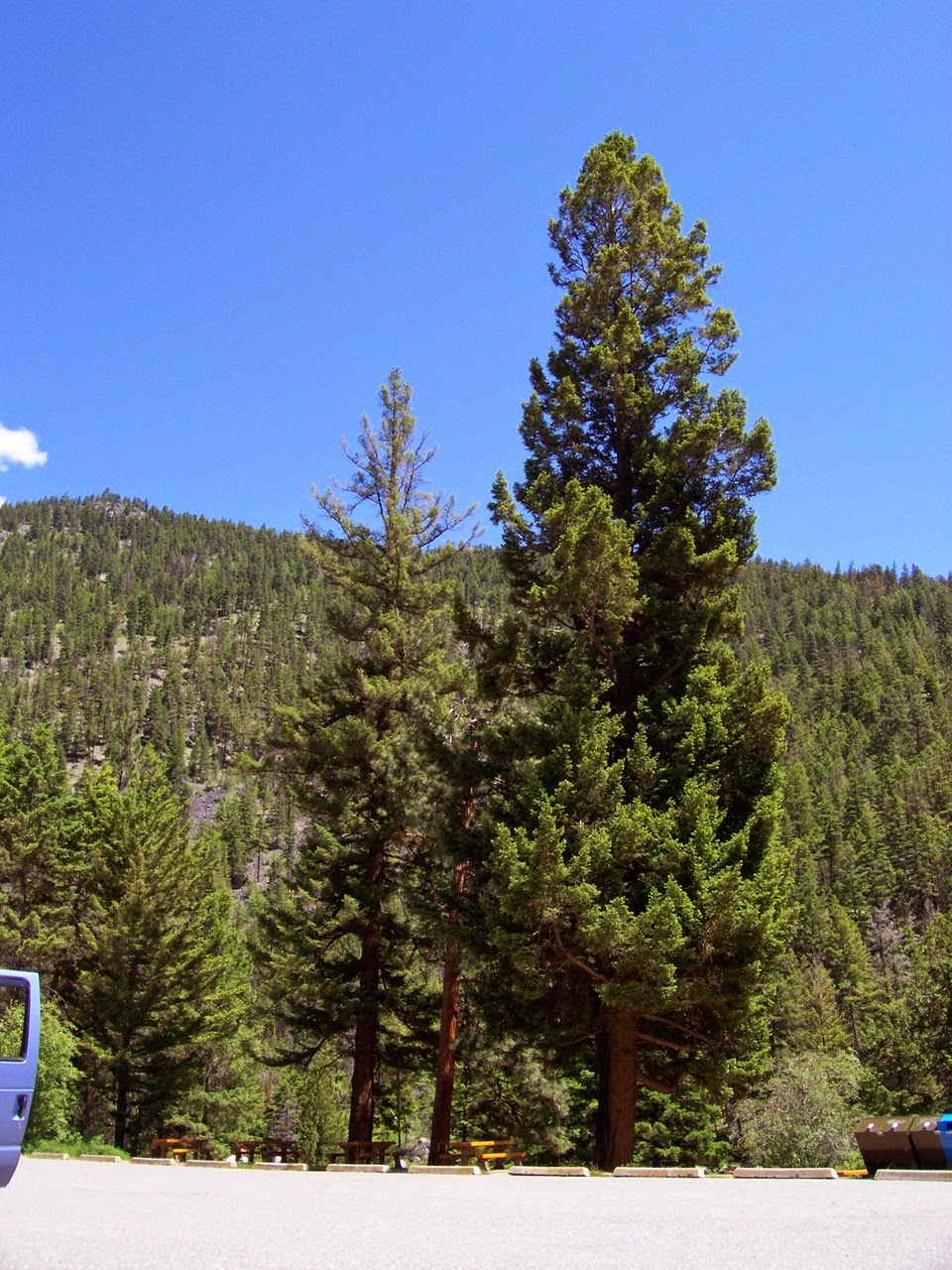 Vancouver Island Big Trees is on the road. Yes, 'The Tree People' have left the Pacific Temperate Rainforest, and are on the way to getting established in the Acadian Forest of Nova Scotia.

In the meantime, we will be posting on big trees that we encounter along our 6500 km cross-Canada journey.

The trees featured in this post are the glorious red-barked ponderosa pines, the tallest pine species in North America. These inhabitants of the dry interior of BC are in some respects more admirable than the big trees on the coast. Why? Because these trees don't have the benefits of ample rainfall, or rich soils.

And yet, the pines manage to grow quite huge, as shown by these photos of an impressive trio at the Bromely Rock Rest Area along scenic Highway 3, also known as the Crowsnest Highway. 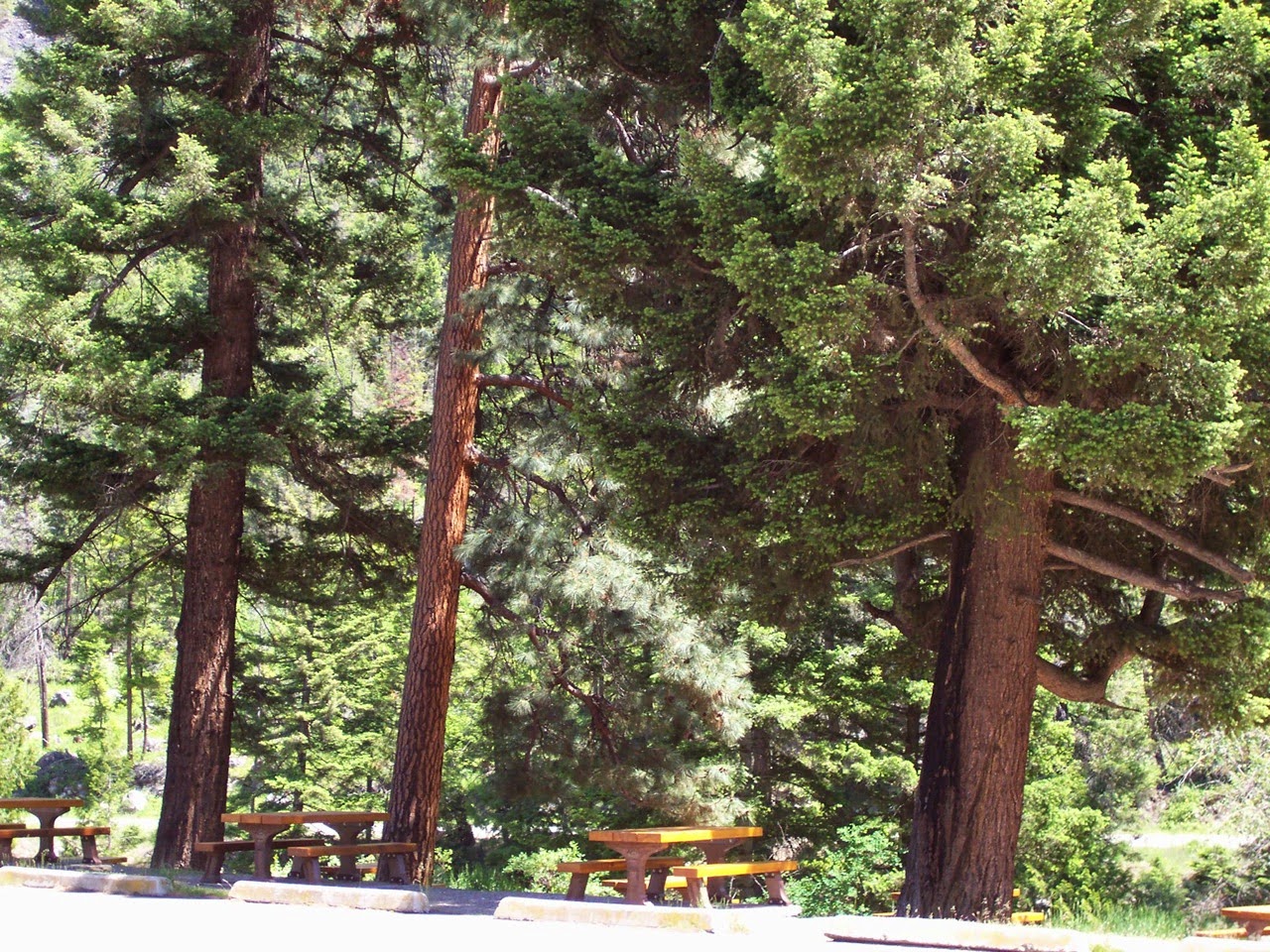 While the coast forest includes the stunted and twisted shore pines, you need to travel  few hundred kilometres east before you can see pines of the size of the stately but threatened ponderosa.

Ponderoas pines are susceptible to attacks by the pine beetle. Indeed, many old growth sites have been decimated by the tiny attacker.

With the dual threats of bark beetles and climate change hanging heavily over the entire ponderosa range, it is not known if these trees will survive the upcoming decades of potential turmoil.

Don't wait, visit these trees now before they are gone.


In January 2011, a Pacific ponderosa pine in the Siskiyou National Forest in Oregon was measured with a laser to be 81.79 m (268.35 ft)  tall. The measurement was performed by Michael Taylor and Mario Vaden, a professional arborist from Oregon.

The tree was climbed on October 13, 2011, by Ascending The Giants (a tree climbing company in Portland, Oregon) and directly measured with tape-line at 268.29 ft (81.77 m) high. This is now the tallest known pine.

The tallest known ponderosa pine in BC is listed in the BC Big Tree Registry. It is 49.9 m (164 ft) tall and is found on the Coldstream Ranch southeast of Vernon.
No comments: Links to this post


How do you climb the 66 meters (216 ft) of the recently discovered second largest (known) Douglas fir tree in Canada?

Why do you climb a tree like Big Lonely Doug?

British Columbia’s threatened old-growth forests are being logged to extinction by industrial logging aided by lax government regulation. But many people, including those in the former logging town of Port Renfrew, realize that trees like the Red Creek Fir and Big Lonely Doug are more valuable standing than cut down.

On Vancouver Island about 75% of the original productive old-growth forests have already been logged, including 90% of the valley bottoms where the richest biodiversity and biggest trees are found.

Once gone, the big trees and primal forests will never be seen again. What a wasted opportunity.

Read more about the first ascent of Big Doug here.

Join the fight to preserve these unique trees by writing a letter here.
No comments: Links to this post


"What kind of person can cut an ancient forest to bloody stumps, bulldoze the meadows to mud, spray poison over the mess that's left, and then set smudge fires in the slash? And when the wounded mountainside slumps into the river, floods tear apart the waterfalls and scour the spawning beds, and no salmon return, what kind of person can pronounce it an act of God -- and then direct the bulldozers through the stream and into the next forest, and the next?


I hope there's a cave in hell for people like this, where an insane little demon hops around shouting, 'jobs or trees, jobs or trees,' and buries an ax blade in their knees every time they struggle to their feet."

-Kathleen Dean Moore
No comments: Links to this post