At one time the traditional lands of the T'Sou-ke Nation grew some of the largest trees in the world. That all changed when Vancouver Island was first opened to settlement by the Hudson's Bay Company in 1849. Walter Grant became the first settler when he bought 200 acres of land on the current site of the town of Sooke.

Grant must have been pleased with the trees on his new property. It would have been a sight unparalleled anywhere in the world - 300-400 foot Douglas-fir ancients approaching 1000 years old were probably fairly common in the area.

One of the first buildings that Grant built was a sawmill. It was a move that signaled the beginning of the end for the primal forest on T'Sou-ke lands, and over most of Vancouver Island.

Amazingly, some of the ancient giants still stand in the ex-logging town of Sooke. After 163 years of near-total transformation, the remaining big tree survivors face a different threat today - booming residential development, and a lack of a tree protection bylaw.

Other municipalities in the region have given a nod to the historical importance of trees by instituting bylaws to protect heritage trees, and other trees of significance. The largest two trees shown in the photos above would most certainly be covered by such legislation.
2 comments: Links to this post

The Wonder Of Trees


I often wonder about the old growth Douglas-fir above. It hangs over the beach of the spit formed by the waters of the Sooke River interacting with the tides in the estuary. The massive bulk of this tree defies gravity and several other formidable and relentless forces of nature.

Exposed roots, forced out of hiding by the scouring of freshets and high tides, now provide a visible scaffolding under the slumping trunk. Other roots, as thick as the major branches above, sink deep into the bank for support and nourishment.

At the other end of this hardy survivor, the top of the tree, or leader, does a sharp bend back from the water, in a slow-motion counterbalance intended to keep the tree from toppling into the sea.

I am comforted every time I see that this old timer continues on in defiance of the elements. It stands, tough, resilient, patient, and steadfast.

I wonder how long it can continue.
No comments: Links to this post

Save The Great Bear Rainforest

The Great Bear Rainforest, on the BC mainland across from northern Vancouver Island, is once again in the international spotlight. In 2006 various stakeholders agreed to work together to protect this precious resource, home of the Spirit Bear, old growth cedars, endangered animals, and numerous indigenous communities. The collaboration was unprecedented, and hopes ran high.

4.4 million acres, 50% of the forest, was protected. Additionally, another 11.6 million acres is managed under an ecosystem management plan. However, in spite of initial successes in moving toward sustainability, a less rosy picture is starting to emerge.


"Overall, the agreements amounted to an ambitious and much-celebrated plan that’s yielded some notable success. Sustainable economic development is starting to take root in communities within the Great Bear Rainforest, which is now better protected from logging than it was before.

But these efforts have also been beset by delays that call into question whether the full vision of the agreements will be realized in time to safe-guard the forest as we know it."

The Great Bear Rainforest encompasses one of the largest areas of intact coastal temperate rainforest left on the planet, and is therefore of global significance. In order to maintain the environmental integrity of this ecosystem, scientists using ecosystem based management, say that at least 70% of the natural old growth areas must be protected.


50% is good, 70% is better, but 100% is what our goal should be. Logging old growth, regardless of where it is, is not sustainable or in the best interests of humanity.

The BC government and other stakeholders set new ground with the 2006 Great Bear Rainforest agreement. It is time to honour those agreements, and set the stage for further protection.

Get more information about the "Take It Taller" Campaign at  savethegreatbear.org.
5 comments: Links to this post

Vancouver Island's big trees have few threats as potentially life-ending as a wicked winter wind, and Monday's maelstrom proved to be the end for many. Tall trees shallowly rooted are constantly in danger from a stiff breeze, but are especially vulnerable in strong winds such as in Monday's storm.

During southeast winds the inside coast of Vancouver Island, including Victoria, gets hit the hardest. The highest winds were recorded across the Strait of Georgia along the Sunshine Coast at 187 km per hour. Powell River logged top gusts of up to 111 km per hour, and Victoria around 95 km.

Three men driving on Ardmore Drive near Victoria Monday morning were prevented from proceeding by a large tree across the road. After getting out of their truck to survey the area, a second tree fell and crushed their vehicle.


Monday's storm reminded many of the whopper winds that occurred on December 15th, 2006. That storm was one of the worst since the 1960s, and knocked down about 41 acres of trees in Vancouver's Stanley Park, as well as thousands of trees along Vancouver Island's West Coast Trail.

The difference between the two storms was that the 2006 storm was out of the west rather than a southeaster like Monday. Sooke was hard hit in 2006s west gales, but was little affected by the southeaster Monday. Because of that, the power stayed on, and I have not seen any trees down in the area.

However, any time the wind blows, I tend to be aware of the trees swaying around me.
No comments: Links to this post

I saw a Washington forest last week without leaving Canada. It was a horizontal forest of raw logs that was laid out on Pier B at Ogden Point in Victoria, BC. Although these weren't trees from Vancouver Island, they reminded me that BC, like Washington, is increasingly sending raw logs to oversea markets.

The forest of logs on Pier B was from one of the world's largest bulk log carriers, the 186 meter (610 ft) Dry Beam. It ran into trouble last December early in its trip from Washington to Japan when a 10-15 meter (32-50 ft) rogue wave hit it, knocked the timber off track, and severely damaged the ship. Many logs went overboard into the north Pacific swells.

The Dry Beam limped into Victoria, unloaded its cargo onto the pier, and underwent repairs so it could continue on its dangerous 8000 km (5000 mile) voyage. But it's not just dangerous for the ship's crew. The more important dangers are in British Columbia's forests.

Our forests, and forest industry, are being irreversibly altered by short term planning. Since 2002, the BC Liberal government has slashed more than 1100 jobs from the Forests ministry, gutting its ability to monitor this precious resource.

During the same time the forest industry lost over 20,000 jobs, and 70 mills shut down. As this has been happening, whole log exports have increased.

Deregulation of coastal forests has relieved forest companies of the requirement to mill their logs locally. This has caused a massive increase in the export of BC whole logs to foreign mills on giant ships like the Dry Beam.

Bulk log carriers are floating our forests, via port facilities in Prince Rupert, to destinations such as China, Japan, and Korea. Along with our whole logs go the jobs that would employ thousands of British Columbians in a variety of value added activities.

We should be as outraged about the practice of shipping whole logs to foreign markets as the Haida were in 1996 when bulk log carriers were leaving Haida land with the very trees that made much of Haida culture possible - its sacred cedars.


"On August 1, 1996 Christian White and crew paddled out into Masset Inlet in a cedar canoe to confront the log carrier the "Haida Brave." The log carrier was loaded with cedar trees that had been cut from MacMillan Bloedel's TFL 39. This action by Christian and crew, and supported by 8 other boats and 70-odd witnesses on the beach was to give notice to MacMillan Bloedel and other forest companies on Haida Gwaii that the current policy of clearcutting the Islands is not acceptable." - from a conversation with C. White, and R. Stocker, spruceroots.org

Read more about the Haida blockade that helped popularize the plight of old growth forests on Haida Gwaii here. The Haida provide a way of viewing nature and the forest that the rest of BC would be wise to follow. They gave notice, as should we.

Let's give notice to the government and forest companies that current forest policies are unacceptable. Let's tell them we expect complete protection of all remaining old growth forests in places like southern Vancouver Island where the original forest is near-extinct. Let's tell them we want to stop whole log shipments, and keep forestry-related jobs at home.

Let's become a rogue wave of protest and stop the ships of destruction that are sailing unchecked through our faltering forests.
No comments: Links to this post

100 Years Of The BC Forest Service 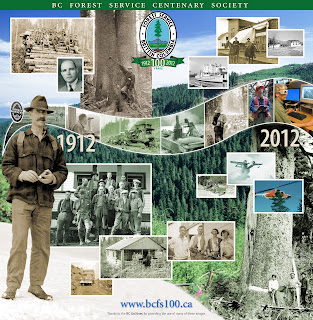 “The B.C. Liberal government has left the fox to guard the hen house, and has washed their hands of responsibility to effectively monitor and enforce forest regulations. This centennial should serve as a wake-up call, that our government is not fulfilling its duty to properly manage our public forests.”  - Darryl Walker


The provincial government is 'celebrating' the 100th anniversary of the BC Forest Service, but many feel that there is not much to celebrate in the province's forests. Even the government is just going through the motions, since its real 'gift' to the BCFS is not a big cake, but another massive funding cut in 2012 for this centenarian public service.

Many have weighed in to show support for this public watchdog, but I would be willing to bet they were not invited to the party.

BC's Auditor General has recently warned of the impact of cuts on forest inventory and research. The Association of B.C. Forest Professionals (ABCFP) warns that foresters may be using out of date data in their decision making.

The Forest Practices Board warns that the government is no longer able to track forest harvesting and restocking activities. These tasks have been turned over to the forest industry itself, and some think that this will spell disaster for the industry, and the environment.

Happy 100th anniversary to the BC Forest Service - here is to restoring it to its former glory and effectiveness once we get a more responsible government that is truly interested in protecting the public interest.
No comments: Links to this post