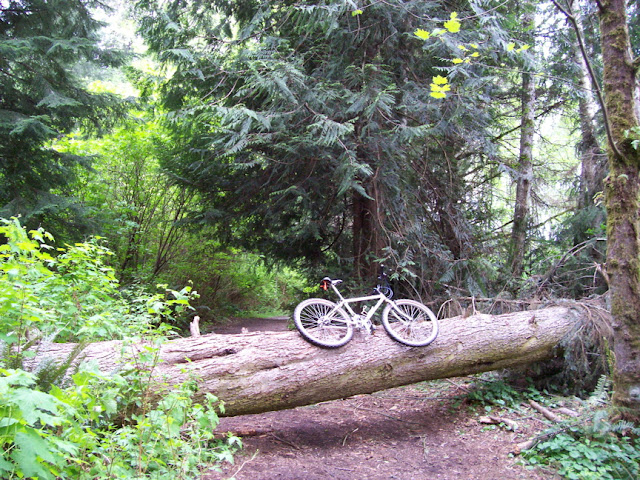 This hefty hemlock came down in a recent storm and blocks a main trail I use when cycling. The trunk is snapped off a couple of meters up, and the heartwood looks punky and soft. 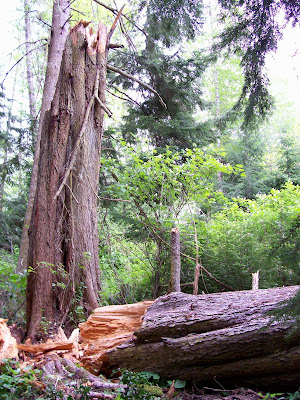 I don't think a bike helmet would be much protection if one happened to cycle down this trail at the wrong time. 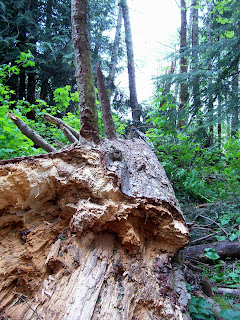 The forecast is for SE winds up to 90km per hour tonight so I suspect there will be more downed trees. Hopefully not many of them will cross trails or take power lines with them.
No comments: Links to this post

Consider The Life Of Trees 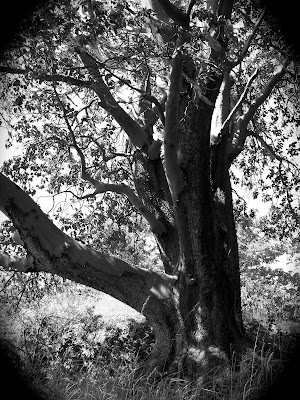 Consider the life of trees.
Aside from the axe, what trees acquire from man is inconsiderable.
What man may acquire from trees is immeasurable.
From their mute forms there flows a poise, in silence,
a lovely sound and motion in response to wind.
What peace comes to those aware of the voice and bearing of trees!
Trees do not scream for attention.
A tree, a rock, has no pretense, only a real growth out of itself, in close communion with the universal spirit.
A tree retains a deep serenity.
It establishes in the earth not only its root system but also
those roots of its beauty and its unknown consciousness.
Sometimes one may sense a glisten of that consciousness, and with such perspective, feel that man is not necessarily the highest form of life. 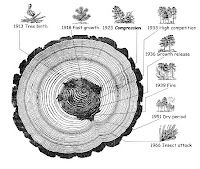 Email ThisBlogThis!Share to TwitterShare to FacebookShare to Pinterest
Labels: consciousness of trees, life of trees

The biggest storm of 2010 blew through the south island April 2nd leaving havoc in its wake. Damage was extensive in Mill Bay with large waves stranding boats, docks, and logs high up on the beach. Lighter damage was widespread and 90 000 people were without power for up to 24 hours or more. See video here.

Winds in the upper reaches of the Beaufort Scale really howl out here where the sea squalls slam right into the rocks and trees. Weather watchers were saying that the April 2nd storm caused t 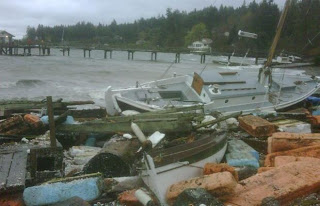 he worst damage the south island has seen since the storm of December 2006.

Wind is natures arborist and the recent 90km/hr winds gave the south coast trees and forests a trimming. Many trees were toppled, including some in urban areas that fell on buildings, power lines and roadways.

Many other trees were trimmed by the gusts, and as usual after every big storm, roads running beside forested areas were completely covered with smaller debris. 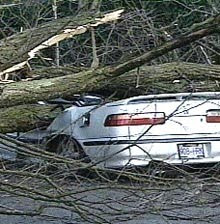 The December 2006 storm was much more powerful with winds topping 150km/hr in places. Thousands of trees were blown down including many across roads, highways and trails. Extensive recovery work had to be done in order to open local beaches and the Juan de Fuca and West Coast trails.

Hundreds of thousands of homes along the Pacific coast were without power. Those in remote places were off-grid for up to a week or more. A building on the waterfront in Sooke took the full brunt of the west winds coming off the harbour and part of the roof was lifted off and deposited in the parking lot. Vinyl siding was strewn around the neighbourhood and hung from trees.


Across the south island and on the mainland trees crashed into homes and crushed cars. As much as I love big trees, there are hazards associated with big trees in urban areas. Trees in the coastal forest are not deeply rooted - they tend to have root pancakes rather than root balls since most have no tap root. A once in 50 year storm therefore can have a huge impact on trees and forests. 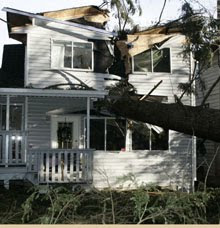 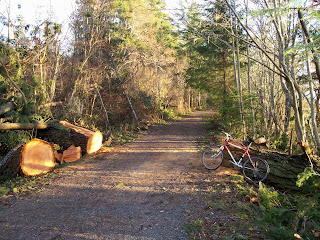 Trees that are toppled, roots and all are called blow down. Blow down areas can be like mini clear cuts with all the trees left behind in a jumbled mass. Trees that break off up the trunk are called wind snap. In urban areas such trees are removed. In Sooke after the 2006 storm, the public came out en masse and fired up the big chain saws to tackle the decades old trees blocking roads and driveways.


Out in the forest, though, the trimming and falling of trees by the wind is a re-occurring, natural event that passes with no fanfare. This ecosystem is ever-changing, and downed trees and standing wind snapped trunks simply add to the richness and diversity in a constantly cycling self-sustaining system.
No comments: Links to this post

Click on the AFA Photo above to link to their online petition page.
Chances are if you have landed on VIBT you like big trees... alive. There are many organizations that work to ensure the big trees stay standing. One of these groups, the recently formed Ancient Forest Alliance, is asking for your signature on a petition to the B.C. government. The AFA is asking our elected representatives to do what I dreamed about on my April Fools Day post - protect what is left of our ancient trees and forests. 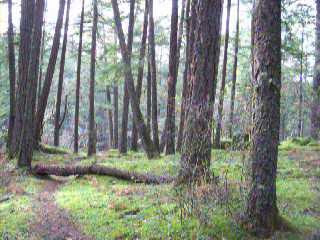 The Ancient Forest Alliance petition is calling on the government to:

Undertake a Provincial Old-Growth Strategy that will inventory and protect the remaining old-growth forests in regions where they are scarce (eg’s. Vancouver Island, Southern Mainland Coast, Southern Interior, etc.)

Ensure the sustainable logging of second-growth forests, which now constitute the majority of forest lands in southern BC.

End the export of BC raw logs to foreign mills in order to ensure a guaranteed log supply for BC wood processing facilities.

Assist in the retooling of coastal BC sawmills and the development of value-added facilities to handle second-growth logs.

Find out how you can support AFA, their petition, and ancient forests across BC by visiting the AFA petition website.
No comments: Links to this post 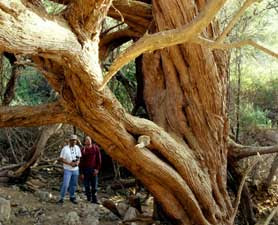 Trees and forests have always been critical to human civilization. Shown above is the huarango tree, native to Peru. It has the deepest roots of any tree, deeper than most trees are tall, and lives 1000 years.

When the Nazca people cut their huarango forests to make way for increased agriculture around 400 AD, they experienced a few short years of benefits, then the people disappeared for all time.

When the trees go, so go the people.
No comments: Links to this post 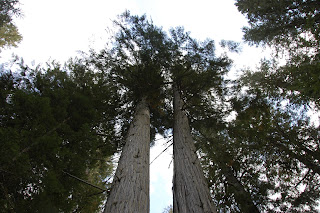 Environmentalist and tree huggers, young and old alike, rejoiced when the government of British Columbia announced today that effective immediately it would put an end to the logging of old growth forest across the province.

Pat Bell, Minister of Forests and Range said, "After sitting down with feedback groups our government has decided to listen and do what the people of this great province have been asking for - put an end to the destruction of our dwindling old growth forest resources."

"About 75% of the original productive old growth forests have been logged on Vancouver Island for example," Bell exclaimed passionately, "and we have to save what is left for our children, and their children. We are thinking at least 7 generations ahead in all our planning. Logging old growth is an old idea that we don't need any more."

He went on to explain that the government has decided to listen to groups such as Western Canada Wilderness Committee, Ancient Forest Alliance, and others, and that the new plan considered old-growth forests to be vitally important for sustaining a diverse ecosystem, tourism, clean water, First Nations traditional cultures, and would therefore be protected henceforth for all time.

Ken Wu, interviewed in the now protected Avatar Grove said, "Wow", and announced the formation of his new group No Oil Tankers Alliance.

The government is in the process now of shifting to the sustainable use of second and third growth forest resources in B.C.
2 comments: Links to this post