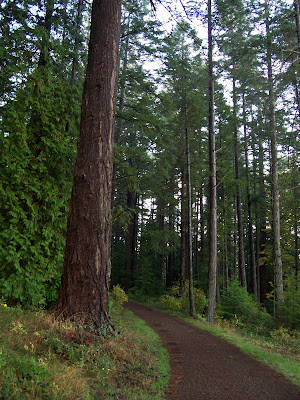 I have passed by the fat, ancient, and soaring hulks of the Douglas fir trees on the Royal Roads lands at the top of Lagoon Road many times. I overlooked the area, even though I have been aware of it's ecological significance for some time. Perhaps this is because the Royal Roads old growth forest is located in Colwood, an urban area west of Victoria. On one side of the street are large houses, big screen TVs, and hot and cold running water. On the other side, a wild remnant of a forest landscape that has been 99% consumed in only 200 years time.


One rainy day I stopped by to explore this island of ancient wonders. I passed through the gate, swung it closed on creaking hinges, and left suburbia behind. It was a time machine. A few steps down a wide path and I was surrounded, immersed in a land little changed over thousands of years. The car exhaust lingering in my nostrils faded away as I walked under the massive canopies of Douglas fir, Spruce and Hemlock. Thick trunks shot up all around and the sun beamed shafts of light through the mist. It smelled richly of growth and decay. A slug slowly slid across the trail and left its own glistening path. 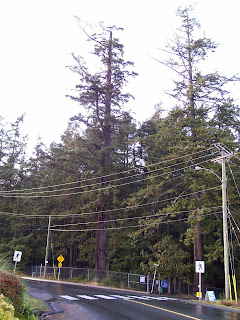 The 650 acre Royal Roads property (and adjoining DND lands) has one of the last remaining undisturbed old growth Garry Oak/Coastal Douglas-fir habitats on south Vancouver Island. The site has a history of human settlement dating back thousands of years. The Straits Salish people, the Songhees, had a settlement at Esquimalt Lagoon, and evidence such as shell midens by the lagoon, and culturally modified trees in the forest, are a testament to early occupation. They have outstanding land claims to the area to this day.


Royal Roads University is the current occupant of the site. There are two manicured gardens and a historical building on site as well. But the old growth forest of Royal Roads is by far the most significant aspect of the entire area. Such forests are rare in this undisturbed state, and in this size, anywhere. Never mind driving out to Cathedral Grove. Here you will find trees that are among the top 10 largest in the province. Trees that are many hundreds of years old. The Sitka spruce growing here represent the farthest eastern limit of their habitat on Vancouver Island. 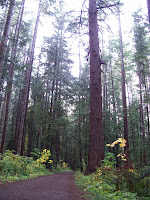 There is pressure to develop this land. Some though, recognizing this ecological jewel, propose protection. Royal Roads and the DND lands are already public meaning that we would not need 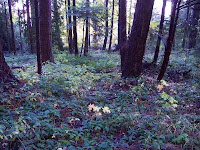 to buy the land in order to protect it for future generations. What a legacy a park would make. Some are calling it a potential 'Stanley Park' for Victoria and region.

Often old growth forest is synomonous with wilderness, but not in the case of Royal Roads/DND lands. This is one ancient forest you can get to on a city bus. There is access off Sooke Road and at Lagoon Rd. and Heatherbell. There is a small spot to park on the side of Heatherbell. Across the street you will see a gate in the chain link fence. Pass through and leave the city behind.

Don't let the Royal Roads urban location fool you. It's wild in there. Can we make sure it stays that way? 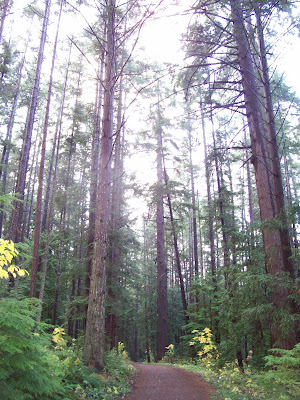 Rally For Our Ancient Forests, Jobs, and Climate: Saturday, October 17, 2009 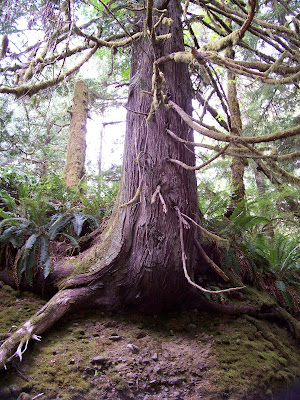 The Western Canada Wilderness Committee was formed in the 1980s, and has been working ever since toward preserving what little is left of Vancouver Island's big trees and ancient forests. They will be hosting a rally in Victoria, British Columbia, Canada on Saturday, October 17, 2009. The Ancient Forest Rally is just their latest effort to educate and motivate government to adopt more enlightened forest policies.

WCWC cut their teeth on the Carmanah Valley campaign which ended in the protection of the tallest Sitka spruce forest in the world. One spruce, the Carmanah Giant, is 95 m/311 ft in height, Canada's tallest known tree. The B.C. government had already given the go-ahead for clear cutting of this precious resource when the Wilderness Committee launched into action.

WCWC was also instrumental in the protection of the Walbran valley, Clayoquot, Sooke Hills, and more recently the Sea-to-Sea Green Blue Belt that connects Sooke Basin to Saanich Inlet, and then extends north to Saltspring Island.

How many jurisdictions on Earth still have 1800 year old trees that grow to be as wide as living rooms and as tall as skyscrapers? Our endangered coastal old-growth forests are world wonders that deserve to be protected. Politicians must listen when enough people make them listen. With YOUR voice we can ensure that the BC Liberal government enacts a solution that works for the climate, biodiversity, First Nations, forestry workers, tourism industry, and the people of BC!
http://www.wcwcvictoria.org/news-item.php?ID=49

We need vast areas of untouched forest, as do the plants and animals that live there. Remaining old growth forests on Vancouver Island are global treasures that deserve to be protected in perpetuity. The wholesale cutting of trees a thousand years old is unbelievably short-sighted. The end of ancient forests is a certainty if things don't change. What will we do then?

If you are able, attend the march and rally. It begins at 11:30am at Centennial Square. Participants will then march to the Legislative Buildings. Show the government that you care about what they are doing in our disappearing forests. Jobs are gone, mills have closed at an alarming rate, and our government, in conjunction with multi-nationals, is exporting whole ancient logs to be processed elsewhere. Is this what we want? Who will speak for this treasured landscape if we do not?
No comments: Links to this post