Happy 43rd Earth Day. In this post I am sharing some Earth-related quotes that inspire me to live more harmoniously with nature, and make every day Earth Day.

"He that plants trees loves others beside himself."

"There is a great need for the introduction of new values in our society, where bigger is not necessarily better, where slower can be faster, and where less can be more."

"It is possible for a nation to have high well-being with a low ecological footprint."

"For 200 years we've been conquering nature. Now we're beating it to death."

"If we aim for what is no longer possible, we will achieve only delusion and frustration. But if we aim for genuinely worthwhile goals that can be attained, then even if we have less energy at our command and fewer material goods available, we might nevertheless still increase our satisfaction in life."

"We can pay the ecological debt by changing economic models, and by giving up luxury consumption, setting aside selfishness and individualism, and thinking about the people and the planet Earth."


If you are in the Victoria area and feel like immersing yourself in an old growth forest, but don't want a long drive, the 565 acre forest on the Royal Roads University grounds in Colwood is a good option. This urban forest contains 250 year old trees some of which are the largest in the area.

Hatley Forest, as it is also referred to, contains trees listed in the Big Tree Registry of British Columbia.
The province's 10th largest Douglas-fir can be accessed via the 15 kilometers of trails that wind through this rare patch of intact dry coastal Douglas-fir habitat. 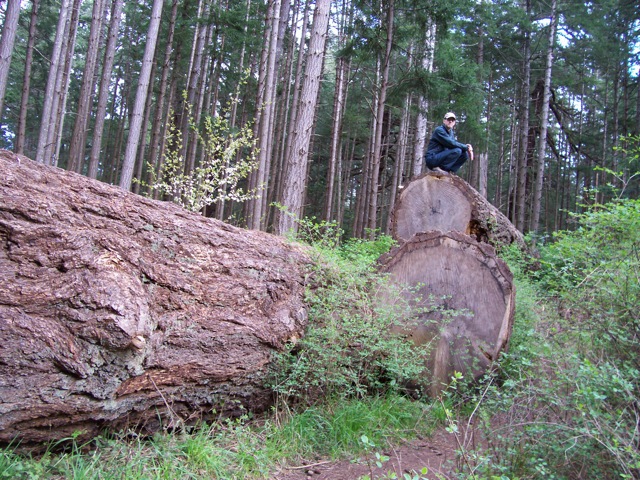 "One study estimated that only one-half of one percent (about 1100 hectare) of the low coastal plain is covered by relatively undisturbed old forests. This is far below what scientists consider to be he minimum area required for the continued survival of these forest types."

The federal government bought this property in 1940 from the Dunsmuir estate. It is now Canada's largest historical site.

It is also one of the largest old growth forests remaining in the dry coastal Douglas-fir ecozone. All just a few minutes from downtown Victoria.

One of the curiosities of Vancouver Island's Douglas-fir forests are stumps that have healed over completely such as the one shown above. These capped stumps make one wonder how a dead tree can continue to grow in this way. If you could peer into the darkness underground you would find answers,  because it is all about the roots.

Several species of trees produce root grafts including Douglas-fir and the true firs. Grafting happens when the root systems of two trees come into contact and grow together. Trees joined in such a way become in effect one organism.

This scenario is common in Douglas-fir forests, and stumps adjacent to live trees may grow over and heal completely in a strange mushroom-like bark cap.

In the Douglas-fir forest, a single tree could be connected with most of its neighbours. When a tree is cut or broken off, adjacent trees treat the stump as if it was a part of themselves and will send help through their connected roots.

This starts with resin soaking into the exposed wood to prevent pathogens and decay from entering, much as a tree responds to any insult to its bark or branches. Once soaked with resin, the cambium (active growth layer just under the bark) starts to form a callus in order to heal the wound. Sometimes this goes on until the stump is fully capped.

But it is not all selfless action that is occurring in the tree community. Grafted roots can also be responsible for spreading vascular diseases from one tree to another, so a cut or damaged stump can be a way for disease to enter and spread throughout the connected trees.

Fully capped stumps remain connected to their neighbours, and while Douglas-fir can not sprout a new tree from the stump like some deciduous trees, the capped stump can continue to increase in girth over the years.
7 comments:

Getting Naked For Old Growth Preservation

The naked tree hugger strikes again. And this time local photographer and big tree activist TJ Watt was there to record the sighting.

Arbor, a 43-year-old California college professor who teaches environmental conservation, travels around the world photographing herself naked with old or endangered trees. She is lending her support to the Ancient Forest Alliance’s efforts to push the B.C. government into coming up with a strategy to protect big trees and remaining patches of old-growth forest.

“The most fragile ecosystems that are still intact should be put aside,” said Arbor, who posts photos of her tree travels on her treegirl.org website and is writing a book about her love of big trees.

“It’s amazing for me to see the forests on this Island and I wonder how the people who live here can watch the cutting of the forest. There is only so much you can do before it’s gone.”

The San Juan spruce is Canada's largest Sitka spruce, and the second largest in the world. It grows in relative obscurity in the San Juan Forest Recreation Site next to the San Juan River. It is about a 35 minute drive from the former logging town of Port Renfrew.

This amazing old growth tree does not have official protected status, so it is fitting that the team of Julianne Arbor, TJ Watt, and the Ancient Forest Alliance have come together to keep ancient, disappearing, and at-risk forests and trees in the news.

You can read more about the San Juan spruce in our post here. You will find driving directions, and photographs of the tree. Thankfully, there are no pictures of me doing any naked tree hugging. I am not nearly as photogenic as Ms. Arbor.
No comments:

Pre-Election Information Night and Rally For Ancient Forests in BC 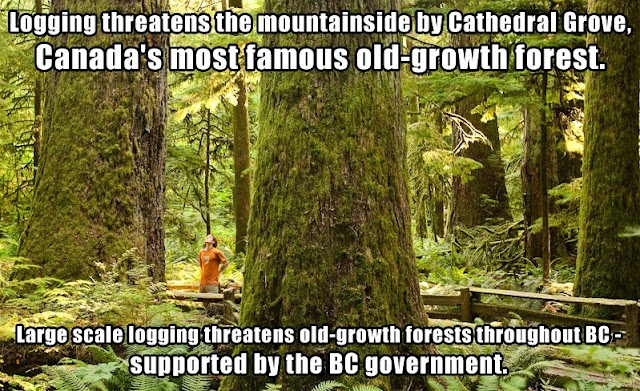 A reminder to come out to the Pre-Election Info Night and Rally for Ancient Forests on Wednesday April 10th from 7:00 to 9:00 pm at Alix Goolden Hall, located 907 Pandora Ave (corner of Quadra and Pandora), Victoria BC.

Join the Ancient Forest Alliance for an info night with new maps on the status of BC's endangered old-growth forests, draft legislation on how to protect them, and a variety of speakers including:

A century of unsustainable logging has eliminated the vast majority of the biggest, best old-growth trees in the valley bottoms and lower elevations that historically built BC’s forest industry. This has resulted in diminishing returns as the trees get smaller, more expensive to reach higher up, and lower in value.

As second-growth forests mature and now dominate the forested land base, the BC government has done little to stimulate investment in second-growth sawmills and value-added facilities to process the logs. Instead, they’ve allowed vast quantities to be exported raw to foreign mills in China, the US, and elsewhere.

Our remaining “productive” old-growth forests where the large trees grow, or “ancient forests”, today consist of only a small fraction of their original extent. This is particularly true on Vancouver Island, the southern mainland coast, and in the BC interior.

On Vancouver Island, 75% of the original, productive old-growth forests have been logged, including over 90% of the valley bottoms where the largest trees grow.

The history of unsustainable resource extraction around the world is replete with examples where the biggest and best stocks have been depleted one after another, resulting in the loss of resource industry jobs along the way.

BC’s politicians must not allow this familiar pattern of high-grade resource depletion, ecosystem collapse, and the impoverishment of rural communities to continue in BC’s forests under their watch – or through their active support. A major change in the status quo of unsustainable forestry in the province is vital. Politicians who fail to understand this fundamental concept must not have power.