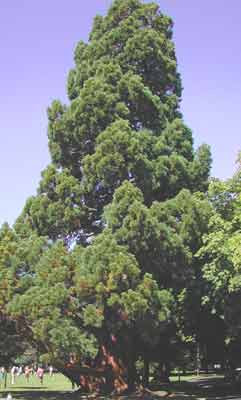 Giant sequoia (Sequoiadendron giganteum), possibly the largest tree species in the world, are to be found in several locations around Victoria, BC. These trees, native to California, were planted from imports brought to the region at the turn of the century. The tree shown above is in Beacon Hill Park.

Beacon Hill Park is designated a Heritage Tree site because of its extensive collection of beautiful native and non-native trees. Among the most visited and photographed is the tree highlighted here, located on Circle Drive. It was planted in 1913.

Sequoia are impressively large trees with distinctive reddish bark covering massive trunks that soar skywards without tapering significantly for much of their height. The bulbous broad canopy matches the girth of the trunk, and together they dominate the site in which they grow.

Other Giant sequoia in Beacon Hill Park stand near Park Way and on the north side of Goodacre Lake near the Stone Bridge. 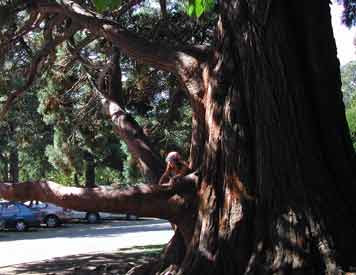 The Giant sequoia and Coast redwood may be vying for largest tree by volume, but it is one of Vancouver Island's native trees, the Douglas fir, that may have been the tallest trees of the ancient west coast forest. The best of them, over 122m/400 ft tall, are long gone, too.

The sequoia of Victoria are outstanding trees that are hard to miss. The Beacon Hill Park trees are worth visiting to get a taste of what the current world champion tree species is like.

The park is rich with tree life, from exotic species like the Giant sequoias to ancient examples of native varieties such as Garry oak.

If you feel like venturing farther in search of giant Giant sequoias in Victoria, check out what some claim is the primo sequoia in town. This monument to massive can be found at a residential address at the corner of Moss Street and Richardson in Fairfield, just east of downtown.