What Happened To The Really Big Trees?

Not so long ago, the Pacific coast was the Land of Humongous Ancient Trees, from the Queen Charlotte Islands to California. They were among the largest trees to ever grace the planet, and they covered all of Vancouver Island. The elders of this forest community were thousands of years old. As a whole, the forest had existed since the retreat of the most recent glaciers, about 10 000 years ago. For many thousands of these years indigenous peoples utilized the trees and other plants of the forest. Even now culturally modified trees can be seen standing in forested areas. Such trees are protected in British Columbia.

When Manuel Quimper sailed into Sooke Bay in 1790 and claimed the area for Spain, he found the Coast Salish T'Sou-ke people living between the ancient forest and the sea. Spain was not in the practice of establishing settlements in North America, but simply viewing the new land entitled them to it. The dripping, impenetrable forest must have been an awe-inspiring, yet threatening, sight to sailors viewing the wall of towering green from the safety of their ships. At the time the forest appeared endless and therefore inexhaustable.

Juan Perez navigated the Spanish Navy ship Santiago into Nootka Sound on the west coast of Vancouver Island in 1774. The indigenous Nuu-chah-nulth people came out to greet the Santiago in large dugout canoes made from giant Western red cedar trees. This early contact started the marine fur trade for otter pelts. 235 years later the otters are only now starting to return.

Captain James Cook sailed into Nootka Sound in 1778 representing Britain. He and his crew landed to cut replacement masts from the primeval forest, and thus became the first known Europeans to set foot in what is now British Columbia. Then came Quimper in his little boat to claim the area for Spain. However, before long the entire north Pacific coast would fall into British hands, which would open the door to the Hudson Bay Company, now one of the oldest corporate enterprises in the world (1670-present).

The Hudson Bay Company was granted the colony of Vancouver Island in 1849 and was charged with populating it with settlers from the U.K. At the time a trip around Cape Horn could take up to 6 grueling months. It was the end of First Nations' isolation, and the beginning of the end for the area's ancient forests of giant trees. 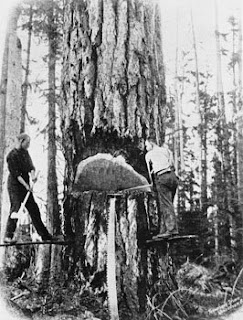 In 1848 the HBC built its first saw mill at Mill Falls in what is now Langford. The area was logged to feed the mill. The hill and creek at this location are named after this early mill. This mill was closed in 1855 when a more powerful stream powered mill at Craigflower Farm replaced it. Mill Hill Park now covers the area of the original logging operation and mill.

In the Sooke region, Scottish settler John Muir built the first steam-powered sawmill on Vancouver Island. By 1860 Muir's Victoria lumberyard was shipping more wood world-wide than any other in the Pacific Northwest. Muir and Co. shipped Vancouver Island wood to help rebuild San Francisco after its devastating fires.

Muir and Co. owned the largest private fleet of ships in the north pacific. John Muir is considered by many to be the father of the B.C. forest industry. Today at the Sooke Region Museum a visitor can see Moss Cottage which was built out of trees milled at Muir's sawmill. Moss cottage is one of the oldest standing buildings on Vancouver Island, built in 1869 (by now it must be 80% moss and 20% wood).

Victoria is western Canada's oldest city, and in the 1850's became the centre of the logging industry on Vancouver Island. At this time logging was mostly restricted to exploiting the huge trees close to the tidewater, for ease of transportation. Preferred trees were tall Douglas fir, Western red cedar, and Sitka spruce.

Although the milling and delivery of these giant trees was big business, the actual logging operations were small. One did not need a large amount of capital to get at trees that could be felled directly into waterways using springboards, double-headed axes, and cross-cut saws. The oldest trees were huge and the tools were hand powered so the forest yielded slowly to the hand logger. On some of the larger trees that were taken, dynamite was required to topple the Karnakian giants to the forest floor. Some trees were simply too large to cut, transport, or mill so were left behind.

Up until 1905 British-controlled areas around the Pacific, and as far away as South Africa, were the largest markets. After 1905 the United States became the largest customer for Canadian forest products. Since the White pine forests of eastern Canada were largely decimated by this time, the west coast became the focus of logging operations.

In the 1900's mechanization started to revolutionize the industry. The trees easiest to get at along waterways were largely depleted. These were some of the largest trees growing in rich valley bottom soils. Going deeper into the forest in such rugged terrain required more power and therefore more capital. Teams of oxen were replaced with horses which were then put out to pasture for more efficient steam rail logging operations, several of which penetrated into south Vancouver Island valleys, including the Sooke region. Larger corporations began to take over, and the high balling era began. 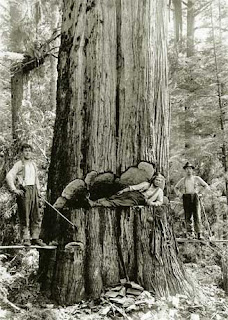 Buck saws, spring boards, and double headed axes began to be replaced by chainsaws, harvesting machines, and huge trucks. Selective logging gave way to clearcuts. Now the forests were threatened by a no-holds-barred attitude that continues to this very day. No trees are safe anymore with the advent of helicopter logging which can access areas previously too remote or harsh to log safely.

The south island has been largely logged off, although remnant small ancient groves remain in isolated pockets. Often it is only the occasional large ancient that survives to this day, but very few have any protection. The undisturbed 10 000 year old forest is gone, and the biological secrets have gone with it. We have little idea what we have lost, or what long term impacts this may have.

The logging industry in British Columbia, aided by sympathetic pro-business governments, continues to pillage what little is remaining of the ancient forest. They will carry on with business as usual until the last big tree falls, or until we make them stop.
No comments: Links to this post 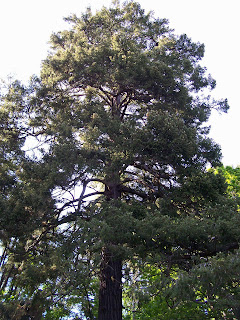 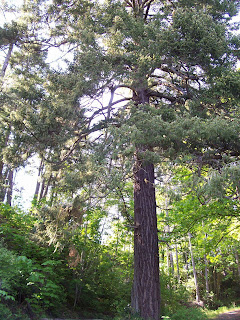 In December 2004 Linda and I came to Sooke to experience life in the rainforest. We had been to Sooke several times over the years, always on our way to hike the West Coast Trail. We knew that there were big trees to be seen on Vancouver Island.

On previous visits to the coast we found it to be a special thing to stand next to an enormous tree a thousand or more years old. An entire forest of such unbelievable huge-ness forces an uncomfortable perspective on the mind. The eyes have problems taking in such immense verticality. Most of us experience such vertical splendor only in the business district of large cities, craning our necks looking up at towers. Imagine a tree, or an entire forest, towering above you at the height of a 30 story building. Trees with trunks larger than

The first month in Sooke we stayed at a bed and breakfast on Hutchison Cove with a fine view over Sooke Basin, East Sooke, and the snow peaked mountains of Washington. The tops of big trees could be seen growing down by the water where The Galloping Goose Trail runs.

One warm winter day I walked down to the Goose. At the bottom of the slope I came to the trail, and a fine example of an old Douglas fir. It is on the land side of the trail, and in its low location is protected from westerly gales by a hill. It has little competition from other big trees. Therefore, it has a beautiful crown and a classic overall shape.

It has not been as beaten by storms like many of the waters-edge trees. Many in this area have had their tops, or leaders, broken off, but not this beauty. It is intact and the whole tree is growing vigorously.

A new access road was built about a year ago that runs right past the base of this tree. While out for a bike ride, I talked to the present owner (the land, and tree, are for sale). She spoke of how her family has loved this tree over the years, and how they took special care to protect it during the construction of the road. Ah, fellow tree lovers.

If you ride or walk the Galloping Goose between the Coopers Cove access on Highway 14 and Roche Cove Park you will see many gnarly old trees, including this one. Some of them are in the range of 100 to 300 years old. Along this stretch of trail you will also see trees in that age range that have been sheared off or blown down, root disk upended and all. These fallen giants are a testament to the strength of the winds that lash this coastline every winter.

Could the B&B Tree live through another 800 years of winter storms? Who will be around to be awed by it if it does?
No comments: Links to this post