Adventurer James French knew the country of Canada better than most. In the late 1800s he took two years to walk across the vast land mass between the Atlantic Ocean at New Brunswick, and the Pacific Ocean surrounding Vancouver Island.

After all the beauty he had seen of the country, and Vancouver Island, in 1885 he decided to settle among the big trees of the primeval forest on a 59 hectare waterfront property 25 kilometers west of Sooke.

French's pre-empted property was enjoyed by his family after his death in 1952. The family was active in local logging up to 1974 when the land was donated to make a park.

The forest at French Beach is no longer populated by the giant first growth trees (although a few survive) that grew here when James French first arrived, although the odd stump attests to the fact that they were once here.

However, this is a great place to see how the forest regenerates over time. Although French's land has been logged, there are some nice medium-sized second growth trees that will one day attain the lofty status of their predecessors.

In another 200 years the forest will have regained its old growth status.

Fronting the beach are pure stands of the salt-tolerant Sitka spruce, one of the only conifers that can survive the harsh conditions along the beach. The Sitka spruce in the park vary from lofty, soaring tall trees to the krummholz (literally 'crooked wood') of the wind and sand scoured spruce fringe.

Big stumps are not the only evidence of the big trees of old. Because the property was logged before heavy-duty industrial logging, much of the original forest profile was preserved, including nurse logs.

In many areas along the park trails through the forest one can make out the remnants of downed giants that are now becoming the forest floor. In many cases the ancient downed trees, that may have been decomposing on the forest floor for hundreds of years, have new trees growing from them. The old nursing and nurturing the new.

The beach and forest trails are available for both day trips and camping. The picnic areas just behind the beach are good spots to see the twisted trees of the spruce fringe, and the taller spruce behind them.

The campground, and some of the other trails, are good places to see some of the larger trees. Away from the effects of the wind and waves, the tree enthusiast will find nice hemlock, cedar and Douglas-fir.

Today you don't have to walk across the continent to get to French Beach, although it would be worth it if you did. This beautiful day use and campground site is conveniently located on Highway 14, and is a leisurely and enjoyable one hour drive west of Victoria. 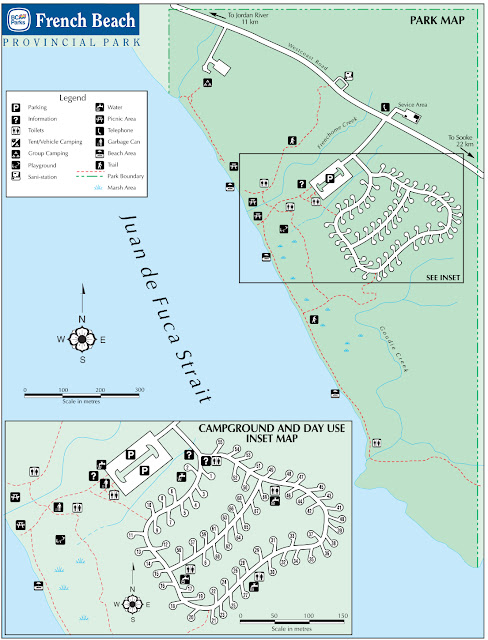 A recent poaching incident in Vancouver Island's remote Carmanah Walbran Provincial Park highlights what is at stake in our forests as we continue to consume the last of British Columbia's big trees. In the most recent publicized incident, poachers cut and hauled out of the remote coastal park, a large (and valuable) 800 year old, 3 meter wide, Western red cedar.

Unfortunately it was not an uncommon incident. The poaching of BC's last big trees is big business, and a daily event, for both legal and illegal old growth tree liquidators.


No one can poach a tree like the government of BC. That is why they won't take the unofficial poaching seriously. If they did they would have to admit that they condone the cutting of trees exactly like this one as a matter of doing business.

Just outside the park boundaries of Carmanah/Walbran and Cathedral Grove, magnificent thousand year old trees like the ones in the parks, share the old growth forests. Yet these equally magnificent unprotected trees are being quietly converted by the logging industry into 'value-added' building materials.

When the last of the accessible big trees are gone, the government and their industry 'partners' will be coming for the trees in the parks (something already proposed for the interior of BC), just like the 'illegal' poachers.

End ALL poaching of our last old growth trees now, official and otherwise.
2 comments: Links to this post

Since the two magnificent Douglas-fir trees in central Sooke were unceremoniously laid low hundreds of years before their time, I have been looking at a different tree-scape from my home across Sooke Harbour.

One of the trees that has been making its presence known is equal in stature to the firs cut only two blocks away. The tree is a magnificent Garry Oak (Quercus garryana) in the Mariner's Village waterfront development.

The grandparent oak is a dominant feature on the property, easily competing with the the new 4 and 6-story structures next to it. It is multi-trunked so it could be that a small, tightly packed grove of trees has cooperated to form one large canopy.

Not only is the tree at least 60 feet in height, but its massive canopy is wider than the tree is tall. From my vantage point at home the oak, when fully leafed out, hides a good part of the phase 1 buildings behind its crinkly-lobed, dark green canopy.

Garry Oak ecosystems are a threatened habitat on Vancouver Island, and these beautiful trees are not common as far west as Sooke. Garry oaks can live up to 500 years, and the one in question is decades old.

Mariner's Village has only just completed the first phase of the development, so I wondered if Sooke was going to lose another of its significant heritage trees as the project progressed.


I contacted Jason van der Valk of Mariner's Village to see if there was a chance that the oak would be saved. His response was more than I could hope for, and quite a surprise. Good news stories concerning development and heritage trees in Sooke are rare.

"From the very beginning with the creation of the rendering, blueprints and concepts, the large Garry Oak Tree has always been forefront, and was the hub of the starting point for the development. Everything will be centered around that."

Jason also explained that the development team has contacted professionals for advice on how to proceed in a way that will not impact the health of the tree as the next phases are built. Garry oaks are notoriously sensitive to surrounding development, and often do not live.

The developers of Mariner's Village are uncharacteristically planning for this tree's survival, and would like to see it thrive for years to come for the enjoyment of of all.

VIBT salutes the tree-friendly approach being taken in this project, and we hope that this heritage Garry oak survives to become a central feature of the new development.
No comments: Links to this post

Yesterday I was cycling through a nice stretch of trees on the Galloping Goose trail up the Sooke River when I noticed a couple of striking creatures.

Clinging to the bark of a large diameter tree were two pileated woodpeckers, the largest woodpeckers in North America.

A little larger than a crow, these flame-capped birds are year round residents in mature forests. I watched the two as they flew from tree trunk to tree trunk, poking into the furrowed bark. I could hear the wind through their ample wings as they flapped from tree to tree.

What a thrill to see these birds here, poking around the spectacular linear park that is the Galloping Goose Trail. This narrow corridor preserves some nice larger, older trees of the type that the Pileated Woodpecker (Dryocopus pileatus) requires for nesting. In younger forests, it will use any large trees remaining from before the forest was cut.

Both were driven toward extinction due mostly to habitat destruction - the loss of the old growth forests they relied on.

Pileated Woodpeckers require the complexities of a multi-storied canopy, large stumps and rotting fallen trees. Their nests have been found in a variety of trees including ponderosa pine, larch, hemlock, western red cedar, alder, and maple trees, amongst others.

Crucial to their survival is the structure of the forest that develops as it 'becomes' old growth (>250 years old). It makes these areas ideal nesting and foraging sites, with plenty of food found in the dense, damp understory. Clear cuts and newer forests do not provide the habitat these amazing birds require.

I ended my bird sighting with one of the woodpeckers peeking out at me as I sat on my bicycle, stopped on the trail. The large, inquisitive bird was peering out from behind yet another tree trunk.

All of a sudden its red crested head would appear, then bob up and down in what looked like a display directed toward the bright red coat I was wearing.

Maybe I looked like a giant woodpecker, an interloper that would only be tolerated in this bird's territory during winter. Now that it is spring, I would be considered a threat to be actively driven off.

Smiling at the Woody Woodpecker routine, I rode on allowing the bird to forget about potential competition, and resume its hunt for juicy ants and beetle larvae living under the bark of the big trees.
1 comment: Links to this post