A reader of Vancouver Island Big Trees sent me an email recently. It reminded me of all the big trees that have been (and will be) sentenced to death for the crime of being in the way of progress.

Unless you live on the prairies, any kind of new development means trees and forests need to be cleared out of the way.

Ever since Europeans arrived in this part of the world "progress" has the ring of axes, chainsaws, and big trees hitting the dirt.

One such example was when the Sooke River Bridge was replaced in 1967. An interesting tree, it looks like it had been pruned or lost its top. The candelabra that results can be seen in a variety of tree species.

The email I received contained the short message that follows, and the photo shown above.

"Your pencil sketch of the Sooke River Bridge on your Vancouver Island Big Trees blog reminded me of a unique tree that was removed to make way for the building of that bridge.

The bridge was built around 1965 to replace a wooden one that was a few feet downstream. The tree was on the east bank of the river, right in the way of  the project, and had to go.

I don't know who owned the house in the photo but I suspect the tree artist lived there. Or maybe BC Hydro was responsible!

Not sure what species of tree it was, maybe a true fir (Abies) of some kind. Photo taken by me in December, 1964."

Thank you, Art, for sharing your historical big tree photo with us.

War In The Walbran


VICTORIA – One of Canada's most important old-growth rainforests is under direct threat of clearcut logging. New maps obtained by the Wilderness Committee show logging company Teal Jones has laid out eight new cutblocks in the central Walbran Valley on Vancouver Island, a focal point of the War in the Woods for decades.

In recent years, Teal Jones' logging operations have been targeting old-growth and edging closer to the iconic Castle Grove, the finest stand of monumental cedar trees in the Walbran Valley. The new proposed cutblocks surround Castle Grove in an unprotected area on the north side of the Walbran River, near the boundary of Carmanah-Walbran Provincial Park.

"Intact old-growth forests of this size are incredibly rare and endangered – so much has been cut, and we have a moral responsibility to protect the little that's left," said Torrance Coste, Vancouver Island Campaigner with the Wilderness Committee.

"The north side of the Walbran River should be completely off-limits to industrial logging.
This area has been ground zero for the War in the Woods in the past, and that's exactly the level of conflict Teal Jones is choosing by moving into this area now," Coste added.

The Wilderness Committee contacted Teal Jones last fall, after finding new surveying tape in the Walbran Valley. The environmental group highlighted the importance and scarcity of old-growth forests of this type, and asked Teal Jones to shift its operations into less contentious areas elsewhere in its large forest tenure (TFL 46).

"This company has proven it cares about nothing but its profits. It's time for the provincial government to step in before Teal Jones does more damage in the Walbran Valley."

The central Walbran Valley is in unceded Nuu-chah-nulth territories. The Wilderness Committee is calling for a solution that protects the extremely rare old-growth ecosystems and ensures First Nations' access to traditional resources.

Wisdom Of The Trees

For these reasons it is natural to feel we might learn wisdom from them, to haunt about them with the idea that if we could only read their silent riddle rightly we should learn some secret vital to our own lives."


Find out more about the tree shown above, and how to get to it, on my post about the Chin Beach trail cedar. Enjoy the big trees while they last.
1 comment: Links to this post

BC Exporting Record Amount Of Raw Logs (And Jobs) 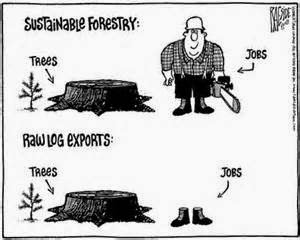 “Growing up in small-town Vancouver Island, I never met anyone who agreed with raw log exports. Even my most conservative, pro-extraction relatives froth with anger at the mere mention of this practice.”


The following is from Northern Insight/Perceptivity - March 14, 2012

In the last year, the Pacific Northwest (BC, WA, OR) exported well more than $1 billion worth of raw softwood logs to China. Shipments for 2011 were more than in the preceding five years combined.

Increased demand for logs might be great for the logging industry, but it results in closures and layoffs at sawmills and other wood processing facilities.

A few corporations do well harvesting logs in British Columbia but, without subsequent processing, many service and supply businesses that serve the industry are starving. We are not merely shipping logs to China; we are exporting jobs that ensured our own prosperity.

BC government policy once allowed only for export of logs surplus to local needs. They still make the claim but, from the time Gordon Campbell's Liberals took power in 2001, raw log exports soared. 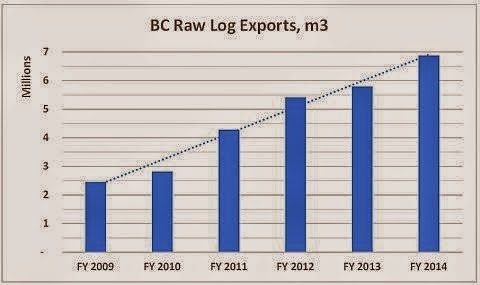 Political and economic pressures prevent BC mills from interfering with overseas shipments. One of the province's largest sawmill operators told a public meeting that he was pressured to NOT bid on logs slated for export even though his mills were critically short of fibre.

BC sends trade missions to China to sell more unprocessed logs while people in small communities all over the province witness the closure of sawmills and other wood manufacturers.

When the last BC mill closes, will we be able to afford finished lumber to build our homes? Actually, the plutocracy has an answer for that: "Home ownership is an unrealistic dream of today's young people."


See much more on raw log exports (and many other things of interest to British Columbians and other concerned Canadians) at the Northern Insight/Perceptivity Blog lovingly researched and written by super-citizen Norm Farrell.