The cultures that have thrived on the west coast of North America have lived among some of the biggest trees in the world for thousands of years. In that time, they have used these wood resources in creative and monumental endeavors, including the Haida 6-beam longhouse.

Since time immemorial coastal people have been using the rain forest for an amazing variety of things. Haida Gwaii produced some of the largest Western red-cedar in the world, and they provided lodging, clothes, transportation, and tools - everything the Haida needed.

Cedar is valuable because its wood and bark are water-resistant. The wood grain is unusually straight with few knots so it's excellent for splitting into the long, even, and smooth planks which the big houses required. Cedar is a solid wood yet is easy to carve and its natural oils resist rot.

Forest resources are just as important today as they ever were, although they have been logged unsustainably since the arrival of Europeans. The once rich resource is being depleted, especially the sacred (and expensive) cedar, the center pole of west coast life. However, the Haida approach logging differently, now and in the past.

When Haida lumberjacks of days gone by needed to harvest huge cedar for a new plank longhouse, they would canoe in a large group to the location of big cedars. While one group set up camp and cooked, another went to fell the giant trees needed for the beams and large planks used in building the massive long houses.

To fell the large cedar, wet mud was packed at breast height all around the base of the trunk. Wood was piled around the tree and set alight. The fire was maintained until the tree was weakened and fell to the ground. Then it would be de-limbed and prepared for the journey by canoe to the building site.

The posts and beams, which weighed several tons, were lifted into place using simple tools and the cooperation of the entire village. The longhouse, which could be up to 120 feet long and 20 feet high, had a number of fire pits for warmth and cooking with smoke holes directly overhead. The Haida raised totem poles in front of their houses while other groups painted the facade with pictures of real and mythical beasts.

The trees were harvested in a process of respect and reverence, then were used in efficient and artistic ways that also showed respect for the resource. When the longhouse was old and no longer used, it would slowly return to the forest, melding in to the greenery without a trace.

Beautiful longhouses are still being built on Haida Gwaii, although not as large as some of the historical structures. It has only been fairly recently that the Haida regained control of their access to the cedars of their territory, so we can expect to see more of these traditional dwellings as the Haida continue to reclaim their past.


"In the past cultural wood was used mainly for poles, boxes and masks but with the Supreme Court of Canada, Sapier and Gray decision (2006) this has changed. The court decision, in part says, that the use of cultural wood for domestic purposes is a constitutional right much like the right to harvest wood for poles and weaving. This means that Haida and other First Nations are now able to take wood to build houses or use wood for siding a house."

The Haida Gwaii Land Plan, and the implementation of Ecological Based Management, will ensure that there are trees available in the future for canoe logs, longhouse beams, posts, and planks, totem poles, and other cultural uses.

The Haida Heritage Centre has new longhouses that contain exhibits for the public to enjoy. The totem poles and canoes shown here are incredible.

Check here for photos of some amazing contemporary cedar structures built by a local company.
No comments: Links to this post

The Wonders Of Big Trees


During winter I usually do more big tree hunting online than I do in the field. Every once in a while a really big specimen emerges from the digital background, like the one above. It is a monumental big tree that was not identified, although I had some good ideas as to its type and location. It was a big tree mystery.

It was not difficult to find other photos of the giant. As I suspected, the tree is a Coastal redwood. Several other pictures of the tree on the web indicate that it is in Jedediah Smith State Park in California.

California has the largest trees in the world. If it weren't for them, Vancouver Island would hold this distinction.

However, size doesn't matter so much - it is all about paying attention to the wonders and realities of big trees, wherever they are.
1 comment: Links to this post

Snow In The Big Trees

It is not often that you get to snowshoe at lower elevations on Vancouver Island's south coast. But every once in a while we get a good dump that stays around for a day or two before warmer weather melts it away. I headed up to the end of Sooke River Rd., and Sooke Potholes Regional Park today to take advantage of the recent heavy snowfall. It was a rare winter wonderland. 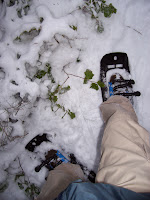 Tons of snow hung on everything in the forest. It changes the look of everything with some things highlighted, and others muted. Along with the weak winter light, the covering of snow turns the landscape into a black and white Japanese drawing. Sounds are muffled, all is quiet.


Everything strained under the weight of the heavy white stuff. Small trees bent over in graceful white arches. Larger trees that were wobbly before the snow have toppled to the ground. The occasional branch gave way and came crashing down, breaking the silence. With the old branches come loads of lichen for wildlife to dine on.

The snowshoeing was excellent on snow depths ranging from a few centimeters under the trees, and up to 30 + centimeters in open areas. The accumulation was enough for easy off-trail hiking. My winter forest bath was a magical, invigorating moment among my favourite big trees close to home.

It is going to warm up to +8 Celsius by the weekend, so get out and enjoy the snow while it lasts. You will be rewarded with a rare glimpse of the big trees in their stunning winter attire.

Watch for falling branches.
2 comments: Links to this post

The largest known Big leaf maple in the province of BC grows on the lower mainland in Vancouver's city-center Stanley Park. The big-leafed big tree is 10.70 m/35 ft in circumference, 29 m/95 ft in height, with a crown spread of 19.5 m/64 ft, and 533 AFA points. Stanley Park has champion maples galore with 5 more on the list of BC's 10 largest Big leaf maples.

That's not to say that Vancouver Island doesn't have some large maples of its own, like the epiphyte-draped tree shown above. This tree is in the same area as the more famous San Juan Spruce, the largest spruce tree in Canada. The Big leaf maple is a short distance away, dominating the center of the campground, and looking like something out of a Tolkien tale.

The Big leaf maple (Acer macrophyllum), is the largest maple in Canada, and the largest deciduous tree in the coastal forest. This tree lives up to its name and produces giant leaves as large as a medium pizza.

A favourite fall activity on the coast is getting out into the forest to see who can collect the largest leaf. Not surprisingly, the winner is usually found in Vancouver.

When water flows the resulting erosion on the landscape can form shapes similar to trees. The 'trunk' of the main river is fed by smaller and smaller 'branches'. The overall form gives the appearance of the canopy.

It is another example of the repeating patterns expressed in nature. If you watch closely you can spot such patterns everywhere.
No comments: Links to this post

The champion tree highlighted in this post is not one of Vancouver Island's big trees, although it is close as the crow flies. The Quinault Lake Cedar can be found across the Straight of Juan de Fuca in the Quinalt Lake Rain Forest area of Olympic National Park, Washington, USA.


View Western Redcedar National Champions in a larger map
No comments: Links to this post

If A Tree Falls, Does Anybody Hear?


Written in 1988, the hit single "If A Tree Falls" from the album Big Circumstance raised awareness of the destruction under way in the world's rain forests. Now, over 20 years later, the destruction continues.

What kind of currency grows in these new deserts,
These brand new flood plains?


Cut and move on
Cut and move on
Take out trees
Take out wildlife at a rate of species every single day
Take out people who've lived with this for 100,000 years -
Inject a billion burgers worth of beef -
Grain eaters - methane dispensers.

Through thinning ozone,
Waves fall on wrinkled earth -
Gravity, light, ancient refuse of stars,
Speak of a drowning -
But this, this is something other.
Busy monster eats dark holes in the spirit world
Where wild things have to go
To disappear
Forever

Quotes by Bruce Cockburn about his song If A Tree Falls:

"When I wrote that song they were cutting down the Amazon rain forest to put in cattle. But that didn’t work out, and the next thing you know they’re planting soybeans. But they’re still cutting down the forests, and they’re still displacing the natives. Corn for the biodiesel trade, that’s the new big thing. You can’t win. You create all this awareness about one aspect of the problem, but as soon as you think you have a foot on top of that, it squeezes out from under and morphs into something else." (2010)

"My exposure to rain forest, with the except on one brief day in Australia, has been in the Northwest, the western coast of North America, which is as much rain forest as anything else. It's just not tropical. So a lot of the time when people talk about the rain forest, they don't realize that they are also talking about the large groves that grow on the west coast of Canada and North America." (1997)

"A lot of critics didn't like that song. They felt it was too pedantic and I was being too literal and I was 'stretching my metaphors too far'. I have a two-word response for those people." (1989) - source

2012 - The Year We End The Old Growth Slaughter

There are people who want to destroy all of the earth's original forests for short term profit. I, like Bruce Cockburn, have a two-word response for them.

Actually I have several two-word answers, the nicest being, "Hell, NO!".

Let's make 2012 the year that we stop the ongoing greedy, senseless, selfish, slaughter of our old growth forests.
No comments: Links to this post