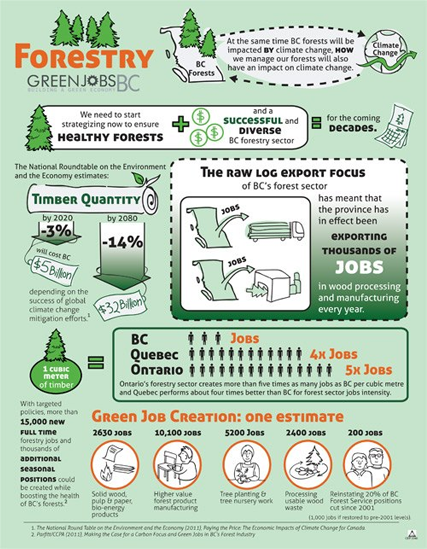 Creating a green economy, including a green forestry sector, is going to be essential for BC as it heads into a rapidly changing world.

British Columbia's current government is intent on the status quo, and is even recommending increasing the export of whole logs harvested in the province's public forests. That is not sustainable, not green, and not in the best interests of the forests, or the people of BC.

Forward thinkers are outlining alternatives that will restore our forests at the same time as thousands of new jobs are created.

If the BC Forest Service was restored to pre-2001 levels it alone would add 1000 new jobs. It would also ensure that no government could plead ignorance while making crucial forestry decisions.

In a 2012 report the BC Auditor General warned that, "existing management practices are insufficient to offset a trend toward future forests having a lower timber supply and less species diversity."

It is time for the greening of BC's forestry industry. Read more at Green Jobs BC.
No comments: Links to this post


Today we are having gale force winds and driving rain on the coast that are making the big trees dance and shake. Such winds can be perilous for large trees, especially if their root area is saturated with rain.

It was the deadly combination of rain-soaked roots and wind that toppled Stanley Park's largest tree back in 2007. Dubbed "The National Geographic Tree" since the magazine visited the city of Vancouver to photograph the monumental Western red-cedar, the death was a blow to park and tree enthusiasts.

This magnificent tree was known to be the largest in Stanley Park, and many believed it was the largest in Canada. The cedar may have been the largest, oldest tree in the park, but it was not the largest or oldest in the country.

The Cheewhat Cedar on the other hand, is estimated to be about 3000 years old. It is 18.5 meters (61 feet) in circumference, and 192 feet tall, making it the largest tree in Canada.

In the 1970s photographers from National Geographic Magazine visited the Stanley Park icon for an article. The tree gained its name, and thousands of visitors as a result of the publicity. The tree had been a pilgrimage destination for nature lovers since the 1890s.

After the National Geographic Tree fell, it could be seen that the roots and part of the trunk had been infected with rot, a common condition often responsible for weakening trees that eventually fall to the ground.

The fallen Stanley Park monument will be left to rot in place, and still makes for an interesting visit to witness this stage in the life and death of an old growth tree. It could lay on the forest floor for hundreds of years before being entirely incorporated into the soil.

The now horizontal Nat. Geo Tree can be found near the Hollow Tree. To view it, go to the Hollow Tree parking lot and cross the road to the Third Beach Trail. It is located a short distance down the trail.
4 comments: Links to this post


When I say that if I weren't around trees I would die, you may think I am exaggerating. But am I? A growing line of research is revealing the importance of trees to human health.

It is vital for us to remain connected to healthy natural areas, like our old growth forests. Our own health depends on it.

In an article called When Trees Die, People Die Lindsay Abrams writes about "the entanglement of our health with that of nature."

"Roger Ulrich demonstrated the power of having a connection with nature, however tenuous, in his classic 1984 study with patients recovering from gall bladder removal surgery in a suburban Pennsylvania hospital.

He manipulated the view from the convalescents' windows so that half were able to gaze at nature while the others saw only a brick wall. Those with trees outside their window recovered faster, and requested fewer pain medications, than those with a "built" view. They even had slightly fewer surgical complications.

Environmental psychologists Rachel and Stephen Kaplan attributed nature's apparent restorative ability to something they termed "soft fascination": Natural scenes, they theorized, are almost effortlessly able to capture people's attention and lull them into a sort of hypnotic state where negative thoughts and emotions are overtaken by a positive sense of well-being.

Indeed, an analysis of numerous studies in BMC Public Health found evidence for natural environments having "direct and positive impacts on well-being," in the form of reduced anger and sadness."

Take a walk in the forest today, and get connected.


One of the most heartening news items I have read in a while was a few days ago. The piece told the tale of a lone wolf living on a small island just off shore from the city of Victoria.


Wolves are a symbol of wilderness wherever they live. The same as other top predators like bears and cougars, the presence of wolves is an indicator of a functioning ecosystem. Indeed, the top predators are necessary for optimal ecosystem management.


A recent survey looking at the loss of top predators (especially wolves) in the Northern Hemisphere found "that the loss of major predators in forest ecosystems has allowed game animal populations to greatly increase, crippling the growth of young trees and reducing biodiversity. This also contributes to deforestation and results in less carbon sequestration, a potential concern with climate change."

It goes on to say that "large predators can help maintain native plant communities by keeping large herbivore densities in check, allow small trees to survive and grow, reduce stream bank erosion, and contribute to the health of forests, streams, fisheries and other wildlife".

The forest needs the wolf.


View Staqeya The Wolf in a larger map

The islands off Victoria are in Songhees First Nation territory. The band gave the animal on Discovery Island the name Staqeya, which means wolf in Lekwungen.


The wolf has also been seen on Trial Island, perhaps in a bid to return to the wild. But there are a few kilometers of danger before the edge of the forest begins, and the wolf returned to Discovery Island.

Wolf is an important symbol in Coast Salish culture, and has been for eons. Many stories are told about this amazing forest creature that coexisted peacefully with the people.


The most important wooden canoe design in Coast Salish territory is known as the Wolf Head Canoe.

Nuu Chah Nulth legend believes that the Killer Whale will come to the rescue of the Sea-Wolf when in trouble, and therefore the wolf is the figurehead on their canoes. 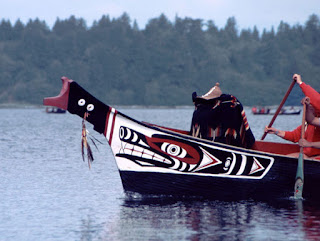 The design (by bands on the rough outer coast of the island) proved so seaworthy that it gained acceptance and use throughout the Salish Sea area.

That wolves can still exist on Vancouver Island after 150 years of European contact and exploitation is good news. Top predators, like wolves, are a necessary part of the ecosystem on the south coast, and are a direct link to eons of Coast Salish history.

Staqeya is reportedly lean and healthy, and could conceivably stay on the island indefinitely. She has been eating a varied diet including seals, bird, clams, crabs, and possibly river otters.


The Songhees would like to see the wolf stay. Fish and Wildlife however, has already tried to trap the animal with no success, and may try again.


But wolves, being very smart creatures, are wary of anything smelling of certain humans. I'm cheering for the wolf, and the wilderness it requires and helps maintain.
2 comments: Links to this post


Marine salvage of big trees has always been a part of BC's forest industry, and continues to this day. In Clayoquot Sound by Tofino, Salvage Towing wrangles large trees that fall into water, and float them to their small sawmill.

This 'eco-lumber' is environmentally friendly since it replaces cutting trees in the forest. 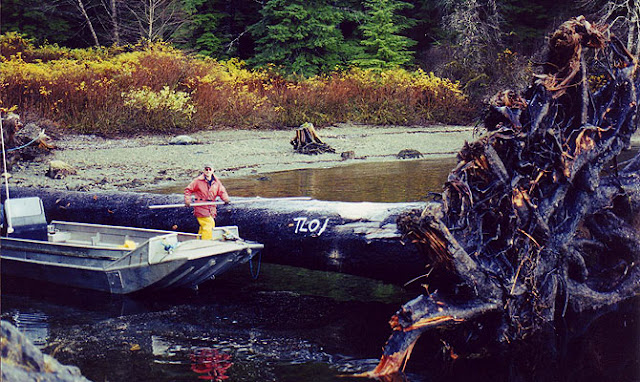 Salvaged wood from the small mill is used for value-added enterprises such as furniture making. These photos were taken from the Tofino company website Adirondackchaironline.com. They use reclaimed wood to make beautiful eco-furniture.


Using reclaimed wood is another way to help relieve pressure on our remaining old growth forests.
No comments: Links to this post

Driftwood On The Move


Winter on the west coast means lot of rain, high water flows in rivers, and the highest tides of the year. That means storm tossed driftwood is on the move. Winter beachcombers are pleasantly surprised by the appearance of new woody debris on local beaches.

Often these drift logs, given up by the fury of the ocean goddesses, become the target of salvage operations. While recovered Douglas-fir is may be used for lumber or firewood, more valuable Western red-cedar, or Yellow-cedar, is valued for shakes, shingles, furniture, and structural wood.

Drift logs on beaches may be accessible to water, or land-based wood recovery efforts. I am amazed by the lengths the professionals will go to salvage beautiful chunks of wood from wherever they come to rest.

I have seen some small scale log salvaging operations near my home on Billings Spit. Drift logs often show up in the Sooke River estuary after being washed down the Sooke River during high water flow events that scour the river and wash out fallen debris. Occasionally really big debris washes down to the sea.

I have watched small boats carrying salvagers with large chain saws approach drift logs in the Sooke River estuary in order to lay claim to prize woody resources. At high tide they move in, and the chain saw is used to cut the root section off so the log cab be slowly hauled away for processing.


Some of the drift logs on beaches are large enough to withstand not only the salvagers, but also the onslaught of years of winter weather. These semi permanent drift logs become lasting features on the otherwise ever-changing beach landscape. Until a really BIG storm comes along.

The storms give it up, the storms take it away, unless the beachcombers get to it first.


I recently saw the results of a log salvage operation about 3 km up the Sooke River where a large cedar fell partially into the water. The middle section of the log had been sawed out, leaving the root section on the bank, and the top stranded alone in the middle of the river.

The saw operator had to work suspended over the water for both cuts - I would have liked to witness the skill this must have demanded.

The only way to get the log out is to float it down the river during high water, or high tide (preferably both) then wrangle it, tether it to a boat, and haul it somewhere it could be hoisted from the water.

Big trees and big storms mean big drift logs on the move. It is all part of the beauty of a west coast winter.
No comments: Links to this post