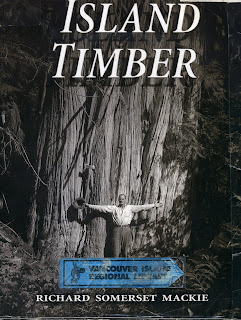 "In the big woods the snow still lies two feet deep and it makes you a little melancholy to think that these cold green depths will shortly be reduced to ruin by monsters of machinery. The towering logger with the movie-star face, who stands beside us on the flat car admits a pang of remorse at the prospect of denuding this green valley, but what can you do about it? No logging, no work for loggers."

I like flipping through the pages of historical logging books. These are not naturalist books celebrating the beauty of the forest, but the stories and photographs contain inevitable glimpses of the big trees and the primordial forest.


The beauty was undoubtedly evident to the people that witnessed the dismantling of 10 000 years of evolution in the coastal forest. 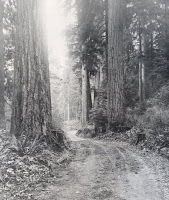 Island Timber by Richard Somerset Mackie is a richly illustrated book about the logging of the coastal plain forest between Comox and Campbell River on Vancouver Island. It covers the period between 1900 and 1938, and spans logging technology from oxen and skid roads to locomotives and giant steam-powered skidders.

The author talked to the people that worked in the forest and their stories reveal a deep respect for the landscape. These were hard working men that worked with double-headed axes, picks, shovels, and wheelbarrows in the beginning. They built greased skid roads along which oxen, and later horses, dragged the massive logs to water for transport to mills.

With the advent of new technology like cross-cut saws, spar trees and steam-powered skidders, the pace picked up and the forest fell faster than ever before. Locomotives hauled it all away with an equal efficiency. Where people settled dynamite ripped enormous stumps from the ground to clear the way for farming.

Native communities have used the forests resources for thousands of years. Local native cultural practices center around the Western red cedar, or "long life maker". For eons it has supplied the people with everything. Huge dugout canoes are made from whole cedar logs. Cedar also finds use in longhouses, medicine, hats, and clothing. Culturally modified trees in the forest yield evidence of the coastal cedar-based societies.

How different things were when European loggers and land grabbers descended upon Vancouver Island in the 1800s. Whereas native peoples' impact was limited to what they needed in their communities, the newcomers' profit-motive knew no limits.


Early logging operations around Comox left some trees standing as they were not marketable at the time. Sometimes old-growth cedar was cut and simply left on the ground. Logging operators were after the biggest, knot-free Douglas firs that blanketed the coastal plain. And for a while, there were lots of them. Trees with diameters of seven feet across at breast height.


Only the best trees were taken, including some of the biggest ever seen anywhere. De-limbing was 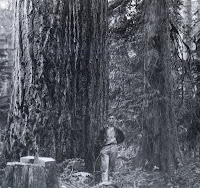 time-consuming so the crowns of the trees were left on the forest floor. The crown portion of the tree could amount to 1/4 to 1/3 of the height of the tree.

Near the Oyster River, 1927 - Filberg Lodge & Park Association
The limb-free portion, or boles, were so large that some could be cut into 3, 4, or 5 forty foot logs. Rail flatbed cars often held a single tree in several bucked logs. 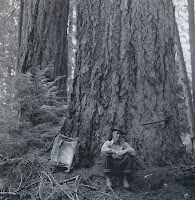 
One has to marvel at the sheer scope of the job that lay before the men that first sought to exploit the forest for profit. Surveying, road and railroad building, falling, cutting, bucking, yarding and loading were all difficult, dangerous occupations. The forest did not yield easily. Many men were killed.


Vancouver Island lumber has been shipped all over the world for over one hundred years. It has built San Fransico piers more than once. British Columbia owes much of its early development to logging, but massive sacrifices were made. Such sacrifices continue today.

Ancient forest between Courtenay and Campbell River, 1918. By 1938 this forest was gone. - Courtenay & District Museum and Archives

Historical logging books provide us with evidence of a forest that few of us have ever seen. Such original forests still exist, but they are diminishing in size all the time. Will future logging books document that the last of Vancouver Island's entact wild forests were logged in the 2000s? 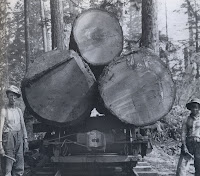 The big ones roll away north of Courtenay, 1912 - Vancouver Public Library

"Yes, more trees will grow, the valley will be green again some day, but it will never see giants like these. They are a thousand years old, these trees beside the little railway, five and six feet through at the butt, and over a hundred feet to their lowest branches. It will take ten centuries to replace them, and men will not wait that long again... The progress of the little locomotive up this narrow valley is the progress of man, most destructive of all animals, into the vanishing storehouse of nature." - Comox Argus, 1933

Robert Van Pelt's book Forest Giants of the Pacific Coast is one of my favorite big tree books. The author has a unique passion for trees, and a talent for not only finding record-breakers, but also carefully measuring and accurately rendering them.

His painstaking depictions separate the champion trees from the forest, and each has its own unique and special character. I also like the depiction of the tiny humans at the base of Van Pelt's drawings to give the giants a scale we can relate to. You can see how massive these ancient trees are.

Van Pelt's work inspired us to take a look at some of our own tree-related art. 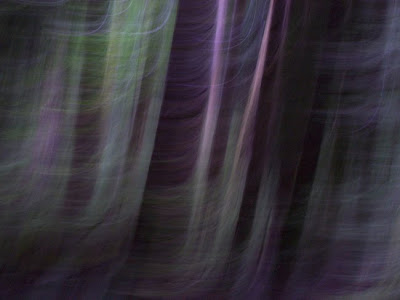 Linda has a knack for taking interesting abstract photos with our point and shoot digital camera. This one was taken in the Royal Roads forest in Colwood. She says it is an accurate depiction of the sense she feels while in the forest and around ancient trees. 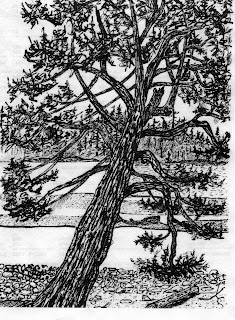 This is a pen and ink drawing of a favourite local tree that has been leaning out over Sooke Harbour for a hundred years or more. 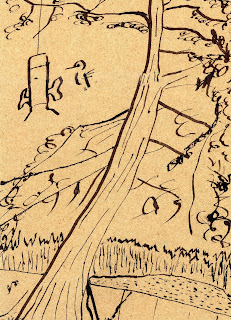 Leaning Tree and Hummingbird, Linda Hughes
This is the same tree, also in pen and ink. 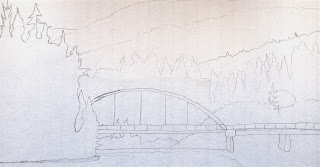 Yes, I am obsessed with trees - I can't even prepare a meal without being sidetracked by their allure and beauty. This piece almost made itself as I stood at the counter. The two dimensional sculpture is made from: Garbanzo beans for the tree, and dried kidney bean pods for the ground.
No comments: Links to this post