How do you celebrate BC trees and forests while in the treeless, water-challenged Nevada desert, site of the Burning Man Festival? Bring a bit of the forest along with you by building a tree house art car, then invite the crowds in among the trees.

That is what a group of Vancouver Islanders are doing with their creatively converted old school bus.

"It's a nod to the BC forest," stated one of the participants working on the project.

Some nice BC wood was used on this tree house project, which is currently spreading the sweet smell of tree sap over the dusty flat lands of Burning Man.

Read the article in the Times Colonist here, or go to the tree house art car website to learn more about this creative conversion.


"People all have great memories of tree houses when they were little, whether they fell out and broke their arm, ate a mud pie, made out for the first time or read Playboys. And it’s a nod to the B.C. forest.” 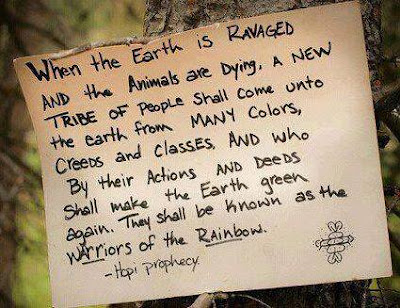 A recent open letter to the Vancouver Island community from the World Rainbow Family had something to say about the ongoing desecration and destruction of ancient forests on the north island.

In part, the letter stated:


"A main reason sounded for why we shouldn’t be able to gather on Raft Cove was the environmental impact on this place of significant natural beauty. What our family saw on our journeys around the North Island deeply shocked us, and we would like to share with the local community and the world the horrific level of deforestation of ancient and sacred trees occurring now on the North Island.

The Hopi prophecy that forms the ideology of our family is that a tribe, from all corners of the world, with multiple colours, will rise up from the midst of destruction and heal the earth. Given that we are a deeply environmentally conscious group, these environmental concerns were hard to comprehend. Historically, we have been involved in local environmental matters, such as the 1993 protection of the Clayoquot Sound forests."

The protests of 1993 in Clayoquot Sound near Tofino, BC are what you do. You educate, organize, and gather together 12,000 citizens. Then you put your body between those that would kill and their prey - the big trees in one of the last intact ancient forests, a 350,000 hectare wilderness area.

In the case of Clayoquot, site of the largest act of civil disobedience in Canada's history, protesters were putting their bodies between the agents of big logging interests and one of the largest remaining tracts of  ancient temperate rain forest left on Vancouver Island.

Hundreds of ordinary people providing valuable feedback to the people they employee in government, and a valuable service to humanity for protecting this unique global gift, were arrested for their efforts.

However, their work got done what letters, phone calls, petitions, facts, meetings and the truth failed to do up until then.

Indeed, people gathering in great numbers in streets, squares, avenues, parks, and on the ocean and up logging roads is usually the only thing that will stop (or slow) the rampant greed of self-interested individuals in both government and business.

From Haida war canoes blockading enormous bulk whole log carriers full of sacred old growth cedars, to Clayoquot Sound, to concerned citizens gathering on the lawn of the legislature, organizing and gathering together to exercise our civic responsibilities is the most effective way to go.

And now, 20 years after Clayoquot, the pressure is building again all over Canada as hard fought for environmental protections are stripped from the books by resource mad federal and provincial governments.

Logging of ancient trees close to Cathedral Grove, proposed pipelines, dwindling salmon in our ocean, damaging run of the river private power providers, and renewed threats of logging in Clayoquot virtually ensure that mass acts of civil disobedience are sure to occur once again.

When they do, the victorious protests in Clayoquot Sound will be used as both a guideline and inspiration.
No comments: Links to this post

Mapping The Giant Sequoias Of Victoria, BC


This map is interactive - click on the tree icons and get more information about specific sequoias. View a larger version of the map here: "Giant Sequoias In Victoria".

The same mild climate that grows the fattest, tallest native trees in Canada, also nurtures some amazing exotic trees on south Vancouver Island. A case in point are the Giant sequoias (Sequoiadendron giganteum), many of which were transported here as seedlings over 100 years ago by settlers from California.

So loved were these California native trees that many made the journey north, and many were successfully planted. In just over a century some of these seedlings have reached, well, giant proportions.

The tallest and widest trees in Victoria are both sequoias which is not surprising considering this tree species is the largest in the world. Also not surprising is the fact that people are still loving these trees after 150 years of occupying their new home.

They are among the most photographed single trees in the area. My post on The Giant Sequoias Of Beacon Hill Park is the most viewed of all time on this blog. They are unique in this region and are far from their traditional range, making them of special interest.


Giant sequoia occurs naturally only in California in a narrow band of mixed conifer forest, between 5,000-8,000 ft. elevation on the west slope of the Sierra Nevada. Climatically, the Giant sequoia prefers the "Cool Summer Mediterranean" (Csb) climate.

Victoria has a Mediterranean climate, and although we are north of their northern limits, the sequoias have done well here.


I am in the process of mapping the sequoias in the Victoria area that I am familiar with from wandering about town. Many I have found simply by driving around and looking for the tallest trees on the horizon, then navigating to their base for photos. But there are always more trees to be found.

Lately I have been cruising around town using Google Maps instead of my truck to see if I can find more of these big trees. I figure that Google has the cash - let them pay for the gas. I can also get reasonable photos by taking screenshots while on Street View.


Using the above map one could set up a walking, cycling, rolling, or driving tour of interesting sequoias in the downtown area.

Not downtown? Chances are there is a Giant sequoia in a neighbourhood near you. Check the map.


There is even a small sequoia down the street from where I live in Sooke. It is a mere baby only a few decades old and stands at a tiny 10m (30ft) in height. Eventually it could outlive civilization, and end up the tallest, fattest tree in the new coastal wilderness.

It is a treat to get a feel for the mighty California sequoia forests right here on the south island. If you can't make the 15 hour drive to the Sierra Nevada, this is the next best thing.

Do you know of a Victoria area sequoia that you don't see on the map? Please leave a comment below, like Bernard did, and describe the location of any notable sequoia that you know of. I would like to continue including new trees in this mapping project, and your participation can go a long way to filling in much needed information.

Thank you. Now go enjoy the trees, even if it is on Street View on the map above.