It is the second largest known tree of its type on the planet.

The largest cedar is the Quinault Lake Cedar on the Olympic Peninsula, over the Juan de Fuca Strait from Sooke.

After a hike to the Cheewhat Lake Cedar, tree pilgrims are often left feeling speechless. It is difficult to achieve a sense of proportion around such a massive living thing. The Cheewhat Cedar is often described as "a wall of wood." This wall is old, with estimates ranging upwards of 2500 years, and still growing.

In practice, however, the liquidation of this sacred tree continues. British Columbia's business-friendly government is aiding in the demise of its own provincial trees.

The plan reported that "since 1995, the proportion of old-growth harvested on the Coast has declined from 95 per cent of the harvest to 71 per cent."

The plan attributed the decline to the increase in the amount of old growth protection, but is more likely due to the dwindling supply of old growth trees. With only about 25% of original old growth forests left on Vancouver Island, it will not be long before the cathedral-like ancient groves are gone.

They are the oldest, too. In ideal conditions a cedar can live for thousands of years, making it the oldest living tree in the British Columbia rain forest. The oldest trees in the Sooke River valley are easily many hundreds of years old, perhaps close to one thousand.

One of the indicators of old growth forests (over 250 years) is an abundance of large diameter woody debris. It includes large fallen logs as well as standing dead trees (snags), and provides habitat and nutrients for the forest ecosystem. Fallen logs also act as "nurse logs", providing nutrients for new trees. Small patches of this type, such as in small ravines, remain along the Sooke River.

A cedar snag can continue to stand for a century after it dies. Once it falls it can lay on the forest floor for centuries more before it fully decays. Because of this rot resistance, cedar is the most valuable, sought after wood of the Pacific forest.

Big tree hunters like Robert Van Pelt think that record breaking cedars still exist on Vancouver Island, although opportunities to identify them are "dwindling." Some may be in unexplored protected areas, and some certainly exist in privately held lands.

All along the river one can also see evidence of logging. Early hand loggers used springboards to raise themselves up the trunk of trees so that they were above the thickest part of the bole (the main stem of the tree). This left tall stumps. 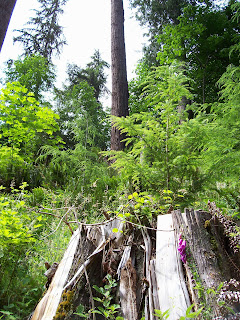 "Cedar Rats", or shake bolt cutters, work in old cut blocks harvesting the large cedar stumps left behind from previous logging. On a good show the cedar stumps can be more valuable than the second growth forest around them.

The massive fluted trunks of ancient cedars are so spectacular that it is easy to forget to look up to admire the equally impressive crowns of these trees. Over hundreds of years they take on a droopy, gnarled, weathered look. The reddish-grey bark is stressed wood at its best, and the crown is a dense confusion of droopy light-seeking branches and scaly leaves. 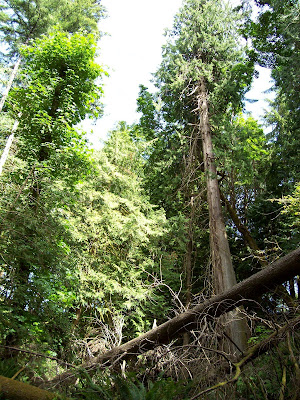 A 250 year old cedar can be anywhere from .61-2.44 m/2-8 ft in diameter. Much larger trees exist here. The biggest trees, though, aren't until you get to the valley bottom. There you will find very large, very old Western red cedars, accompanied by luxurious mounds of moss and towering ferns. 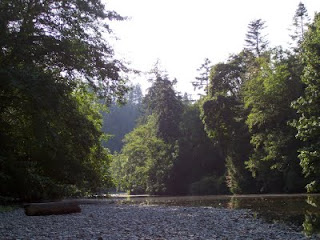 The atmosphere and towering columns give one the sense of being in a natural cathedral. It is hard, even for professional foresters, to age a tree, but these are Brobdingnagian boles. 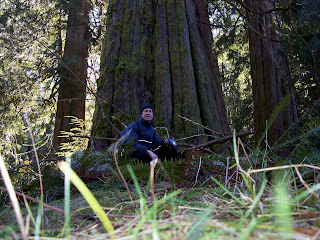 Currently, Sooke does not have a tree protection bylaw, even though many tourists come to the area specifically to see big trees.

Who would travel here to see someones siding, roofing, or deck?

Outside of Sooke and up the coast there are very few protected areas and/or parks. Muir Creek represents one choice old growth location for protection and park status. There are nice Western red cedars in the Muir Creek watershed. 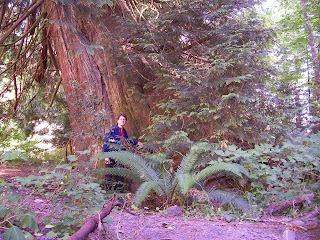 If we are not careful British Columbia will soon have to change its provincial tree from the Western red cedar to the Red alder. Red alder is the "healer tree" of the forest as it fixes nitrogen in the soil and speeds forest regeneration. It is the first tree to grow in clear cuts, and B.C. has plenty of those.