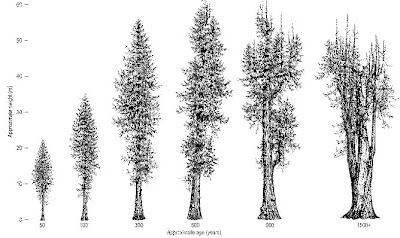 Western red and yellow cedars are the longest lived trees in the ancient coastal forest. Many of these eon-busting trees have been documented to be over 1500 years old and going strong. Older individuals are difficult to date accurately because the core of older cedars is often hollow. As the centuries pass, each tree takes on a grandly buttressed and spiky-topped character. 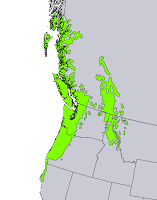 These persistent survivors only grow to great age in ancient forests that have been fire-free and undisturbed for a long time. Some areas along the Pacific coast have not seen large fires for up to four thousand years due to the wet and humid conditions.


The map to the right shows the range of the Western red cedar. All of Vancouver Island is prime growing territory - is a record-breaking monster cedar lurking here, yet to be discovered? Tree experts think that may be the case, and hope that the loggers don't beat them to such a tree before they discover it. 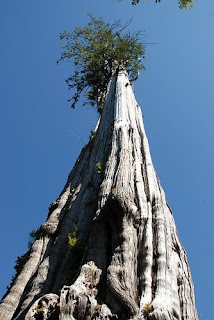 It is conceivable that some cedars have continued to live and grow for over 2000 years. No other tree lives as long in this forest. In old age these magnificent trees also become the largest tree amongst the old growth. The record cedar contains enough wood to build five 1000 sq ft houses.

As of 2009, the three largest known western red cedar were: 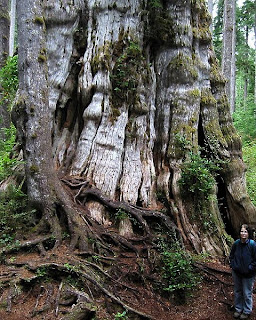 As a Western red cedar ages the crown form changes (see top diagram). The first few centuries the crown is uniform. It is only with great age that individual character and spiky, or candelabra, tops emerge. Such uniquely-shaped cedars are often seen in ancient stands.

"Cedar often has a candelabra-like appearance, because the top leader dies, as do the side branches that take over. The reason for this is not really understood, but it may be a lack of nutrients caused by growing in wet, acidic soils or perhaps drought stress caused by a shortage of oxygen to the roots, which makes it difficult for the tree to take up water."

The largest cedar in Sunriver Park along the Sooke River has a top that is difficult to see due to surrounding forest. Yesterday, while photographing a Big leaf maple just starting to bud out, I noticed a candelabra cedar top poking up from the forest. 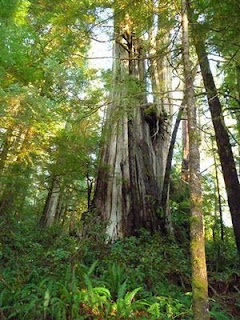 When I got home and started looking at the photos on my computer I was amazed that I had never noticed this feature of the forest before.

Cheewhat Cedar, Pacific Rim National Park
There it was - the top of the old cedar next to the trail. And it shows the typical characteristics of an older-timer. The candelabra top lends more evidence to my feeling that the cedar is a very old tree.

I will be watching for candelabra topped cedars on my upcoming tree adventures. Such sculpted tops truly are badges of honour for these longest living, largest trees of the coastal rain forest.